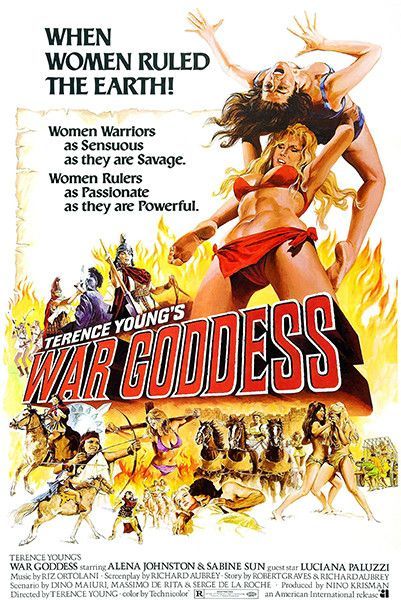 A sexually-liberated (if not terribly explicit) peplum which inconceivably attracted an assortment of talent – director Young, cinematographer Aldo Tonti, production designer Mario Garbuglia, composer Riz Ortolani – but the result is jaw-droppingly awful, so much so that I can’t remember the last time I laughed so hard (for all the wrong reasons) during a film! The warriors of the title are man-hating (i.e. lesbian) Amazonian women who must go through the ‘humiliation’ of mating once a year with strong men (settling on a garrison of the Greek army, despite their well-known reputation as homosexuals) in order to bear females to continue their line!

It’s well and good that the film doesn’t take itself too seriously – as can be witnessed from the self-deprecating text which opens and closes the picture – but that doesn’t excuse the sheer insanity of some of its concepts: the Amazonians being able to avoid an ambush or detect an intruder in their camp because one of them is allergic to males and has a sneezing fit whenever she senses their presence; the mating is preceded by a ritual of anti-male chanting that is supposed to ‘insulate’ the women in the call of their duty, thus making submission (even if temporary) to the opposite sex tolerable. Also worth mentioning are the Olympian challenges between the two armies (which the men invariably lose?!), not one but two all-nude wrestling matches – no doubt inspired by the notorious male equivalent which forms the centerpiece of Ken Russell’s WOMEN IN LOVE (1969) – between the current Amazonian Queen and her jealous and scheming rival (belatedly revealed as her own sibling, but which doesn’t prevent them from subsequently becoming lovers!!), the stupid mugging of a love-struck servant girl who drinks an aphrodisiac prepared for the Queen by the conspirators…not forgetting the ludicrous art direction (everything in the Amazonian court, including the Queen’s throne and scepter, seems to be made in the shape of an axe for no apparent reason!), the incongruous costumes (from the much later Roman Empire era), or the battle scenes in which the fighting Amazonians are barely-concealed stuntmen in drag!!