Personally, I’m excited about this press release because back in 1986 I bought Metallica’s Master of Puppets cassette tape and learned every lyric of every song.  My parents were so proud of me talking about chopping my breakfast up on a mirror…..okay maybe not. Thirty years later and a lot less hair which made my headbanging quite awkward, I saw Metallica in Chicago and it was an event.  Local rock and metal artists attended the concert and I was honored to see local south side guitarist for Disturbed Dan Donegan walking out of the concert.

Back in 1999 Metallica recorded songs along with the San Francisco Symphony which took metal to a new level.  This September Metallica and the symphony will reunite for a concert. For those millions of fans that can’t be at the concert, in October, Metallica fans all around the world will be treated to watching the concert at local theatres.  For a complete listing of theatres and purchase tickets go to the Metallica.Film website. 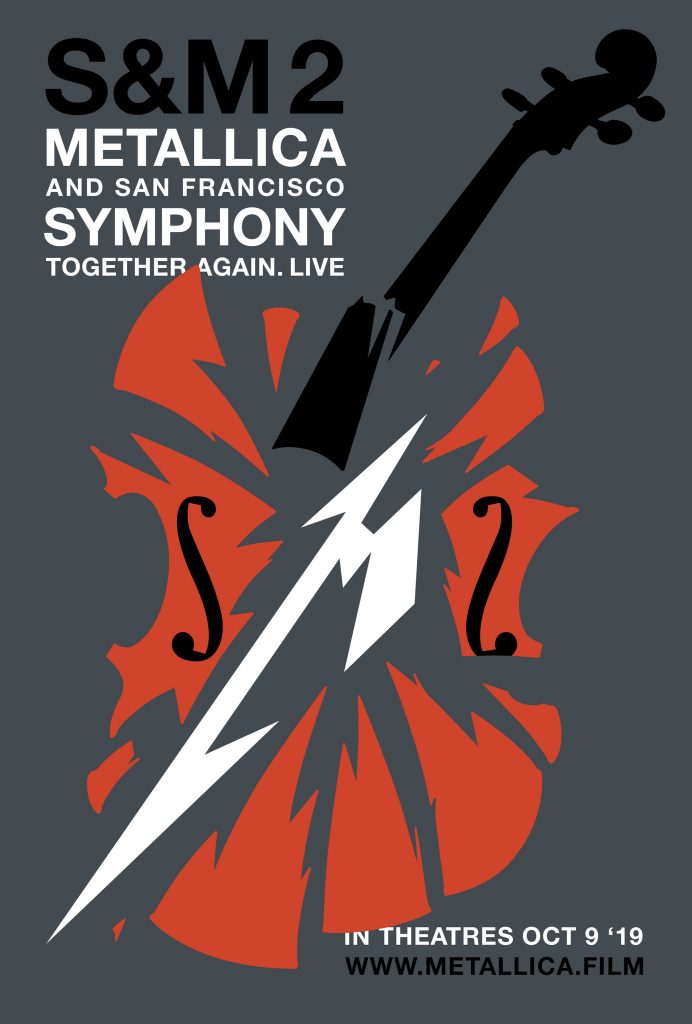 On October 9, 2019, Trafalgar Releasing presents S&M², a must-see celebration of the 20th anniversary of Metallica’s groundbreaking S&M concerts and album recorded with the San Francisco Symphony.

See them once again perform with the Symphony as legendary conductor Michael Tilson Thomas leads a portion of the show, kicking off his final season in San Francisco. Recorded live on September 6th and 8th, the shows also commemorate the opening of the state-of-the-art Chase Center, a historic addition to the city’s waterfront.

Including several tracks from the original ’99 S&M release as well as symphonic versions of new songs released since then, this theatrical release gives millions of fans around the world the chance to eclipse time and experience the show as a modern-day big screen concert.

The original S&M concerts were performed by Metallica and San Francisco Symphony and conducted by the late Michael Kamen in spring of 1999 at the Berkeley Community Theatre. 2019’s S&M² concert will feature the first live performances of these arrangements in 20 years, plus the first-ever Metallica and San Francisco Symphony renditions of songs written and released since the original concert, with new orchestral charts by Bruce Coughlin.

Legendary conductor Michael Tilson Thomas completes the first week of his final season as San Francisco Symphony Music Director with a special appearance, conducting a portion of the show.

Kymberli Frueh, SVP for Programming and Content Acquisitions at Trafalgar Releasing has said: “Trafalgar Releasing is excited to give Metallica fans around the world a chance to celebrate this anniversary concert together in local cinemas in October.

The original collaboration between two San Francisco legends—Metallica and San Francisco Symphony became a true moment in music history two decades ago. Reuniting again to perform S&M² is a salute to the legendary collaboration and creates a special moment for Metallica fans to see this iconic pairing.”