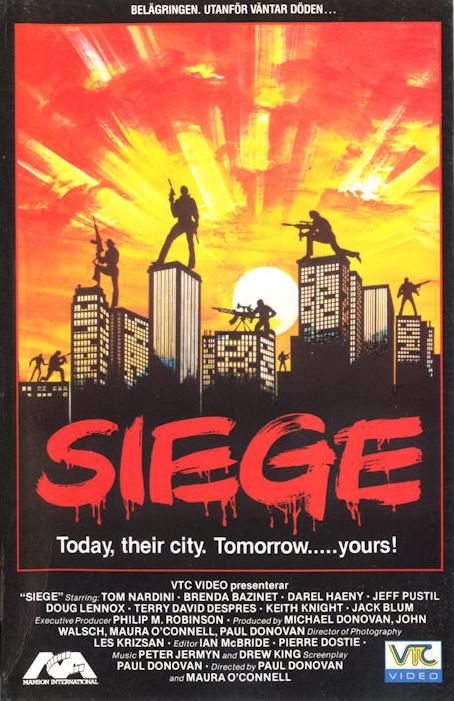 A gritty little early-80s exploitation film from Canada, Siege captures the look and feel of similar movies of the day (Assault on Precinct 13, The Warriors, Death Wish 3), but ultimately fails to capitalise on its interesting premise.

The movie opens with news reports of a police strike in Halifax, Nova Scotia. A gang of right-wing extremists take advantage of the lack of law enforcement by launching an attack on the members of a down-town gay bar, which results in the massacre of all but one of the bar’s clientèle. The sole survivor, Daniel, escapes but is pursued by the gang, until he manages to find refuge with some friendly people in a tenement block. What follows is a night of terror, as the killers attempt to break into the building and finish their job.

This low budget action thriller starts off promisingly with the brutal slayings in the bar, but, due to a handful of ridiculous plot turns and some pretty poor acting, it quickly loses any credibility it might have had. And when it is revealed that one of the good guys is a survivalist who not only has his apartment linked to his neighbours’ by a handy secret passage, but also has access to a range of weaponry, the film takes a step too far into the realms of unbelievability and is unable to claw its way back.

Despite a couple of nifty scenes in which the ingenious heroes set traps for the bad guys, and one or two gruesome deaths (an arrow through the neck is the gory highlight; the silly home-made rocket launcher the most ludicrous), Siege only manages to be an average entry in the urban survivalist sub-genre.