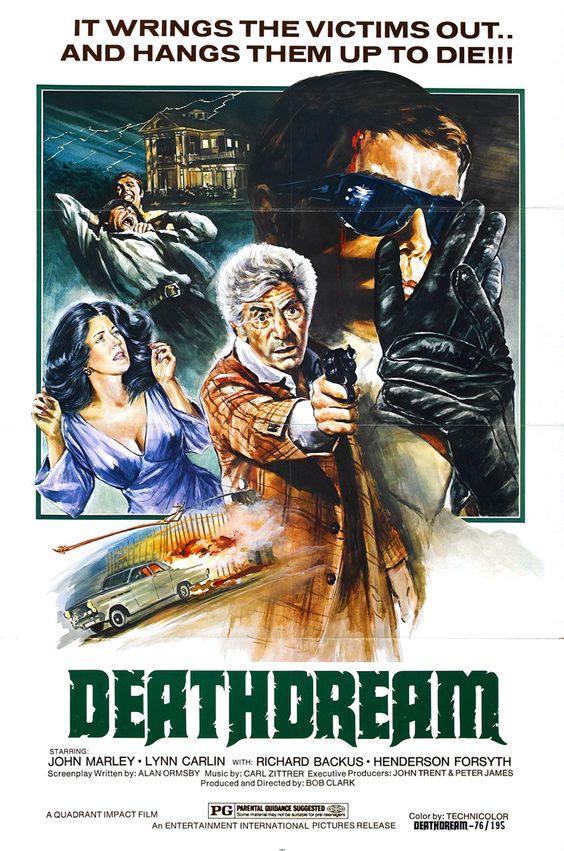 So many horror films, both then and now, exist solely to provide cheap titillation to gore hounds and casual thrill-seekers. ‘Dead of Night’ (aka “Deathdream”), however, is serious business, and seriously scary. Comparable to ‘The Exorcist’ in its exploration of the parent-child dynamic when the child is given over to something sinister, I personally liked this more than I liked ‘The Exorcist.’ It’s leaner, more suspenseful, and less pretentious.

Richard Backus is Andy, a soldier who returns from the war (presumably Vietnam) the very night his parents and sister are informed of his death in combat. The homecoming is not a happy one, however. Andy just isn’t quite himself. Laconic, humorless and irritable, he doesn’t want to go out and isn’t interested in seeing visitors. Worse, there could be a link between him and the gruesome murder of a truck driver that occurred the night of his return.

Like ‘The Exorcist,’ ‘Dead of Night’ – a reworking of “The Monkey’s Paw” — aspires to be more than simply a horror film. It aspires to be a Vietnam allegory, and it aspires to be a family drama. Remarkably, it succeeds as all three. It makes a compelling statement about returning soldiers, is a truly frightening horror film, and also a harrowing family drama. John Marley, as a Andy’s father, conveys torment and confusion effectively, and Lynn Carlin is especially good as Andy’s mother, a woman who has disappeared completely inside of her denial. The suspense is unbearable, and there’s skillful use of both sound and space in creating it. The chills are never cheap and are consistently hair-raising. The movie marches headlong into its inevitable conclusion and is utterly uncompromising throughout. That it was rated PG at the time is a shocker.