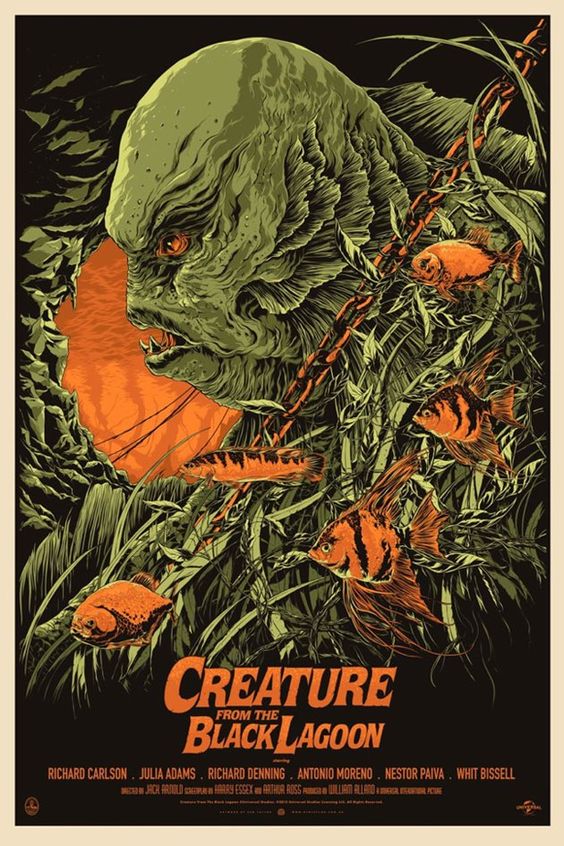 A scientific expedition led by a Doctor (Richard Carlson ) accompanied by his girlfriend ( gorgeous Julia Adams in a mesmerizing swimsuit) along with a motley group (Richard Denning ,Nestor Paiva, Armando Moreno, Whit Bissell) goes to remote Amazon in search of a missing link but they are forced to fight for their lives. In spite of the reluctant help of the locals they encounter a rare being , a deadly pre-historic Gill-Man who attack them . They come face to face with an amphibious and vicious fish-man.

Unforgettable monster vintage of the 50s that originated several imitations , copies and rip-offs . Magnificent picture with sure sense of eerie atmosphere; it’s first in a trilogy and features good acting and bone-fide screams provided by the creepy appearance of the creature that actually is a man in a gill suit incarnated by Ricou Browning . Some reviewers say this exciting film can be seen as precursor of ‘Jaws’. Wonderful and lush underwater photography by James Havens . Rousing and vibrant musical score by Joseph Gershenson . This motion picture , originally in 3-D , is stunning and compellingly realized by Jack Arnold. It’s followed by two sequels ¨Revenge of the creature¨ also directed by Jack Arnold with John Agar , Lori Nelson and repeating Nestor Paiva , in which the Gill-Man is caged and transported into a Florida aquarium and ¨The creature walks among us¨ by John Sherwood with Jeff Morrow and Rex Reason in which the monster again is trapped and submitted to plastic surgery in hopes of humanizing him. Rating : Better than average , worthwhile watching . The film will appeal to classic cinema fans and terror aficionados .