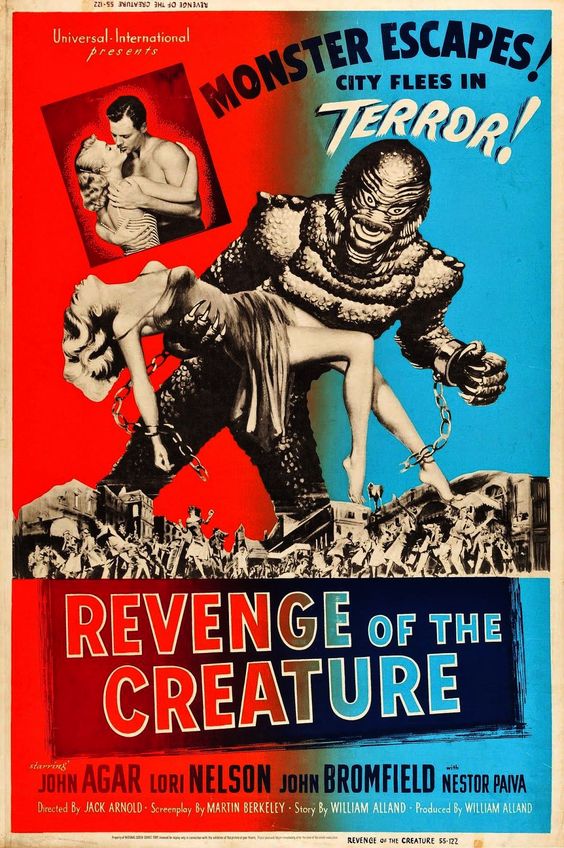 Fairly good sequel of “Creature From the Black Lagoon” has the Rita II traveling back to the Amazon Basin to capture the Gill Man who survived in the earlier film from his would-be-captors or executioners.

Getting the Gill Man trapped in the Black Lagoon the boat’s crew headed by aquatic scientist Joe Hayes, John Bromfield, blast the Gill Man out of the water with high explosives.

Knocked out and helpless the Gill man is shipped back to the USA to Ocean Harbor Aquarium in Silver Springs Florida to be exhibited to the eager and curious public and examined by scores of scientists and ichthyologists. To see just what he’s all about and if he’s the missing link between man, before he evolved into a primate, and fish.

Put in this huge water tank and held down by a steel chain tied to his leg the Gill Man is a major curiosity piece for the thousands of tourists who visit the aquarium.

Much like in the first Gill Man film the underwater photography is breathtaking with the Gill Man trapped, swimming around in circles, and having nowhere to go. As well as when he’s free in the open ocean and in the Amazon River swimming and diving like he were an Olympic Gold Medal winner.

Examined by Prof. Clete Ferguson, John Agar, and ichthyologist Helen Dobson, Lori Nelson,the Gill Man develops a crush on Helen and that drives him almost bonkers as he’s just out of reach of grabbing Helen when she and Clete are studying him underwater. It doesn’t take long for the Gill Man to break his chain and escape from the tank. After tearing up the aquarium, and killing a couple of people, he jumps into the Atlantic Ocean and swims away.

The Gill Man for some reason doesn’t travel south to the Amazon River where he comes from but north to the St. Augustine/Jacksonville area in Florida to follow Helen who’s there with Prof. Ferguson and her dog Chris.