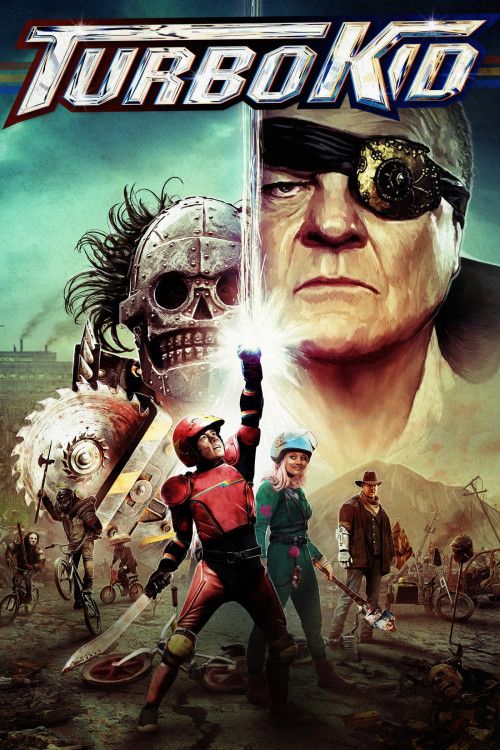 Turbo Kid is a fun little film that mashes a hyper-violent post apocalyptic wasteland with 80’s retro-style science fiction. The film revolves around The Kid, a nameless scavenger who lives alone in an underground bunker. He spends his days scavenging, reading comics and trading at the local settlement. One day he meets a robot girl, falls head over heals, and goes to save her after she is kidnapped by leather wearing goons working for an imperious gang-leader. The Kid teams up with a tough-as-nails cowboy and his robot girlfriend to try and survive, and maybe enjoy the scenery and grow up along the way.

Turbo Kid was straight up adorable. The film features a cool 80’s soundtrack, a la Nicholas Winding Refn’s Drive, in a Mad Max style (or more like The Bed Sitting Room style) post apocalypse setting. The movie was adorable for a couple of reasons: First, all the characters ride around on BMX bikes, which is charming in its own way. These goons with leather gear and masks all riding around on bikes is just too cute! The soundtrack was great (if you fancy bands like College, Com Truise etc.), and the science fiction aspects of its were fun in a campy sort of way.

Don’t get me wrong. This was not a masterpiece of a film. It is low budget, campy and over the top in some aspects. Even so, it was a fun, tongue-in-cheek film that mixes fun science fiction arm blasters with gritty and grindhouse style gore. It has a particularly original charm to it, in parts low budget, but with a ton of heart and soul. The whole thing just oozed charm and fun camp. The actors looked like they were having a blast, the soundtrack is great (once again!) and the film itself was shot well and directed straight. This is no big budget blockbuster, but it is fun, enjoyable, and adorable! Worth a watch for sure if you want to try something a little outside the box. It might not blow you away per say, but it just might charm the pants off of you. I am quite glad I was able to watch this one.