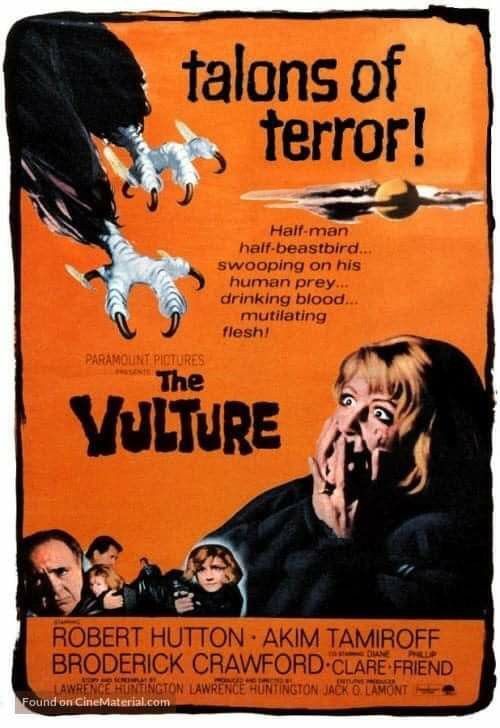 Set in Cornwall but actually produced in Canada, THE VULTURE is a somewhat offbeat sci-fi thriller filmed in the mid-1960s. The cat is a surprising mix of genre regulars and newcomers to the field, but the film has an odd feel to it. It’s got more of a feeling of depth and many of the lower-budget sci-fi films hammered out by second string producers during the big ’50s Sci-Fi Boom, but it falls short of the better know genre efforts.

American atomic researcher Eric Lutens (Robert Hutton) arrives in Cornwall for a rest. He plans to visit several members of his wife Trudy’s (Diane Clair) family and just get away from it all. However, strange things have been happening in the area. A school teacher taking a shortcut through a graveyard during a night-time storm has had a shock that has turned her hair white. Livestock has also been vanishing without a trace.

The discovery of a gold coin, and of an opened grave, brings to light a peculiar local legend. Centuries before, one Francis Real had been suspected of witchcraft. He had been seized and buried alive with his pet — a strange vulture-like bird — and a casket of gold coins. Legend had it that he had sworn to destroy the descendents of the local squire who had overseen the burial. This disturbs Eric, as the cursed man had been an ancestor of Trudy’s.

A gamekeeper hears “a very large bird” over the estate owned by Trudy’s older surviving relative, Brian Stroud (Broderick Crawford) and, investigating, a large black feature is found on the grounds. Eric send it to a noted expert on local birds, hoping he can identify what kind of bird to which it might have belonged.

We now meet the other central characters. Prof. Koniglich (Akim Tamiroff in a wonderful little performance) is a local antiquarian with whom Brian has had a number of dealings over the years. We also meet Brian’s brother Edward (Gordon Sterne), who lives in a nearby town.

Koniglich takes the tale seriously when Eric visits him. The professor gets about with difficulty, using canes — the result of an accident. He also makes a telltale comment about always having been fascinated by science, though he never really developed the interest.

Eric, taking advantage of his scientific background (evidently they do a lot of strange atomic mutation research at the plant where he works), decides someone has conducted a scientific experiment, creating this creature. He reasons this would involve a lot of electricity, and contacts the local utilities to find out who’s used a lot of power lately.

Evidence mounts that there may indeed be some terrible creature lurking nearby. A missing sheep is found torn to bits, in a cliffside cave. Shortly thereafter, both Stroud brothers are carried off and killed by something.

Eric, in London, is contacted by the power company. The only odd thing they can find in their probe is that the Professor has stopped using electricity from their lines entirely. He’d installed his own generators some time prior. Eric realizes that Trudy is the final victim. He races back to the Cornish town, even as she’s snatched from an isolated road near the Professor’s home, by something with claws that swoops down from above.

Eric arrives as the Professor’s home, where he finds a nuclear-powered laboratory in the basement. A skeleton sits at a control panel, and a small broken casket of gold coins lies on a nearby counter. It seems the Professor, speculating on whether or not he might have been related to the entombed man, and looking for the gold, had used his equipment to momentarily exchange himself for the contents of the buried coffin.

Not such a good idea. The swap hadn’t reversed itself, and his atoms had mixed with the remains of the bird. The composite creature had then broken out of the grave.

Going to the cave in the cliffside, Eric confronts and shoots the Professor, who is revealed to have had a gigantic bird’s body underneath the cloaked coat he’d always worn. Stumbling at Eric, the creature falls to its death on the beach below. Eric and Trudy bury the body at sea and decide it’s best that nobody knows what had happened.

An interesting cast. Robert Hutton had started playing juvenile leads, then went on to a string of largely minor genre flicks (MAN WITHOUT A BODY, INVISIBLE INVADERS, THE SLIME PEOPLE, COLOSSUS OF NEW YORK, TROG).

A veteran of over 120 feature films, Akim Tamiroff had also appeared in Godard’s ALPHAVILLE.

Diane Clair appeared in THE HAUNTING and Hammer’s PLAGUE OF THE ZOMBIES.

Not a bad watch, though more for Tamiroff’s eccentric performance than for Hutton’s rather bland heroics.