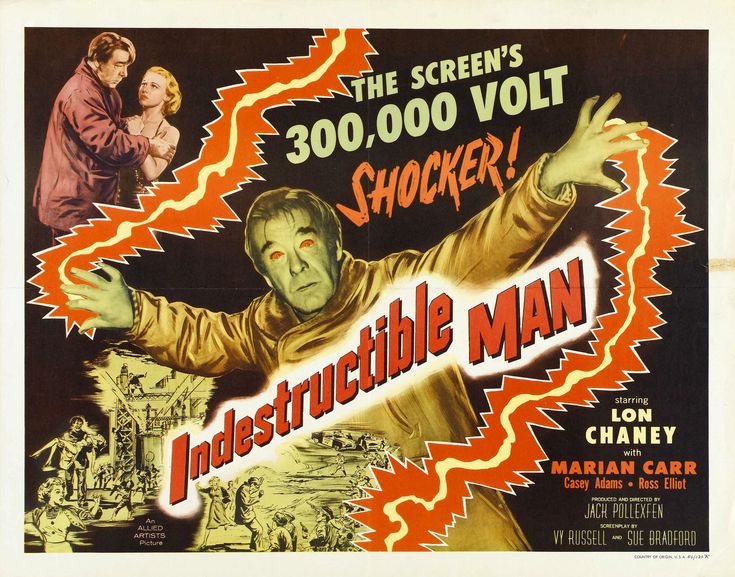 Shooting in the real grimy, mean streets of downtown L.A. not only saved money but added a neo-film noir realism to everything. Lon picks up some quick pocket money playing Charles “Butcher” Benton (we are never told how he got the nickname and maybe are better off for not knowing) a career criminal railroaded to the gas chamber by his ex-partners. He is quickly brought back to life by a well meaning scientist (Robert Shayne) who needs a body to test his cancer cure theory. He zaps Chaney with 278,000 volts (how is THAT supposed to cure cancer?) and restores him to life as “a vicious, brutal animal with an almost inconceivable amount of strength”. His partners (who have names like “Squeamy” Ellis) are suddenly in big trouble! Editing seems to be all over the map in one instance and it seems scenes were shot but then dropped. For example near the end of the film Lt. Chasen (Casey Adams) talks about Eva Martin (Marion Carr) getting out of the hospital. Why was she there? Stills exist showing Chaney rampaging through a police station and trying to carry Ms. Carr away. Jack Pollexfen also recalled directing a scene where Chaney destroyed a precinct and tore open jail cells looking for one of the men who betrayed him. Why were these scenes missing? Do they still exist? Let’s start checking those film vaults! The cast is great, apart from Lon Chaney and Robert Shayne (NEANDERTHAL MAN, INVADERS FROM MARS, etc) there is also Ken Terrell (ATTACK OF THE 50 FOOT WOMAN), Casey Adams (THE MONSTER THAT CHALLENGED THE WORLD) and don’t go for popcorn or you’ll miss an unbilled Joe Flynn as a lab assistant. Scriptwriters Vy Russell and Sue Bradford later teamed up again to do the Grade-Z classic THE ATOMIC BRAIN.