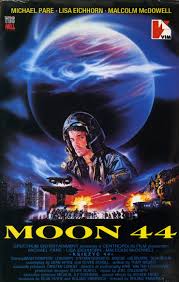 No, I’m not really a “fan” of Emmerich. That wouldn’t be the right word. And yes, his films tend to strain credulity so much that it risks breaking. But let’s admit it… he makes good popcorn flicks(with the exception of 10,000 B.C., that was awful). They tend to be enjoyable, exciting and just plain fun. And this really is no exception; while he gets larger budgets and more attention today, he could certainly deliver back then, as well. This does have a big name… I mean, Alexander Kruemmel, that’s plenty of letters. Just kidding; I’m referring to McDowell, of course. The acting ranges, though this does manage to make Paré appear almost charming. I loved seeing Brian Thompson again(two appearances in Charmed, minor role in The Terminator, and he’s played Klingons; what he may lack in range, he attempts to make up for in muscle, cool to see), even if they gave him unflattering facial hair. The FX are great. Dialog is pretty good, humorous and can be fairly sharp. The sets are reminiscent of Alien, and quite nice. This has guts. There is commentary on the world. The tension is reasonably effective. Arguably, there is not a ton of action(with that said, what there is usually is well-done)… then again, it’s 92 minutes sans credits. There is plenty of strong language, disturbing content and a little moderate violence in this. I recommend this to anyone looking for a quick, easy to get into, cheap sci-fi B-movie