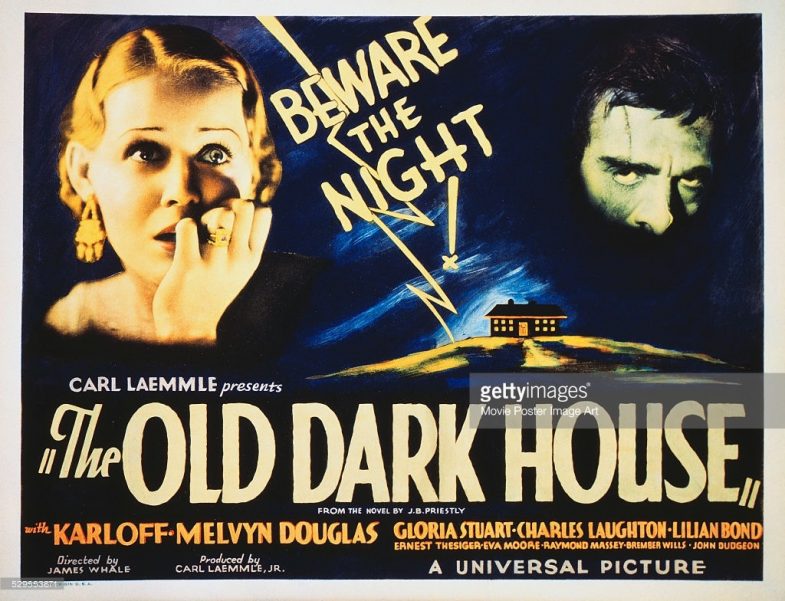 Tales about sinister, creepy mansions were already clichéd by the time director James Whale directed THE OLD DARK HOUSE–and instead of presenting the piece as a straight-forward thriller he mixed the film’s very atmospheric cinematography with a wild strain of parody. The result is a movie with a bizarre camp humor that foreshadows Whale’s slightly later and even more bizarrely camp THE BRIDE OF FRANKESTEIN.

The plot, very based loosely on a J.B. Priestly novel, is perfunctory, existing only to throw together an ensemble cast of already-famous and soon-to-be-famous stars. Five motorists are trapped in the wilds of Wales during a horrific storm and are forced to seek shelter at, of course, an old dark house… but their unwilling hosts are a neurotic Ernest Thesiger, his religious fanatic sister Eva Moore, and their hulking, deformed, and mute butler Boris Karloff. Before the night is over the storm-weary travelers experience everything from a hellish meal to religious lectures–not to mention assault, attempted rape, mysterious cackling, a bit of arson, and a touch of homosexual hysteria (courtesy of Thesiger, Moore, and a surprise male character who is actually played by a woman) thrown in for good measure.

The cast is exceptional; in addition to Karloff, Thesiger, and Moore, we have Melvyn Douglas, Raymond Massey, Charles Laughton, Gloria Stuart, and Lilian Bond, and they wring the most from the covertly wicked script, with Eva Moore ranting about “laughter and sin,” Thesiger inviting Raymond Massey into his room “to see a few things,” and one of the most socially awkward meals ever put to film. But the film’s real power is its cinematography: when they say old DARK house, they really mean it, and the look of the film is just as disorienting for viewers as for the characters; particularly noteworthy is the scene in which Moore lectures Gloria Stuart, with their faces distorted by the bedroom mirror, and the sequence in which Karloff pursues the white-clad and wind-whipped Gloria Stuart with mayhem in mind.

Viewers who expect “Universial Horror” fare will probably be disappointed by THE OLD DARK HOUSE, and director James Whale would create a still more memorable combination of horror and high-camp with THE BRIDE OF FRANKENSTIEN. But THE OLD DARK HOUSE is an overlooked jewel of unusual quality: a sardonic parody of a famous theme, well played, filmed and scripted. Recommended.