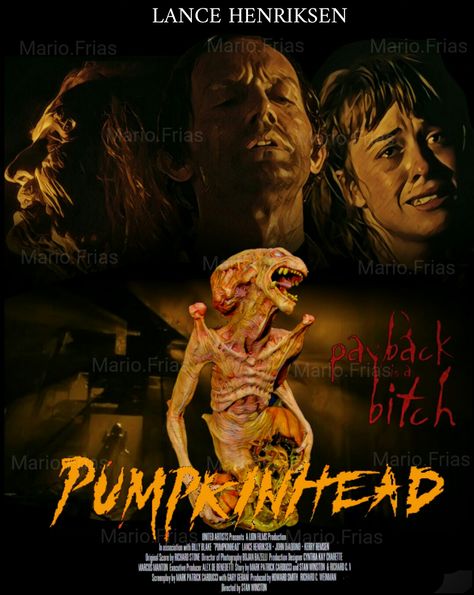 In the countryside, the quiet hick Ed Harley (Lance Henriksen) raises his beloved son Billy alone, working in his grocery on the side of the road. When three couples from the big city stop off at his store to buy some supplies, their leader Joel (John D’Aquino) accidentally kills Billy with his motorcycle and he does not allow his friends to call for assistance. In his hatred, Ed visits the evil witch Haggis (Florence Schauffler) that conjures the demon avenger Pumpkinhead to destroy the teenagers. Later Ed regrets and tries to call off the deal but he finds the price to be paid.

“Pumpkinhead” is a great slash movie of a demon called Pumpkinhead that is summoned by someone to revenge the death of another person. It is interesting to note that the boy is accidentally killed and five teenagers try to do the right thing, but the question is not to be fair or not: the boy’s father is blind by his feeling of revenge, and only after calming down, he unsuccessfully tries to call off the deal, but it is too late. Therefore there is a good message about the danger of a revenge in the end