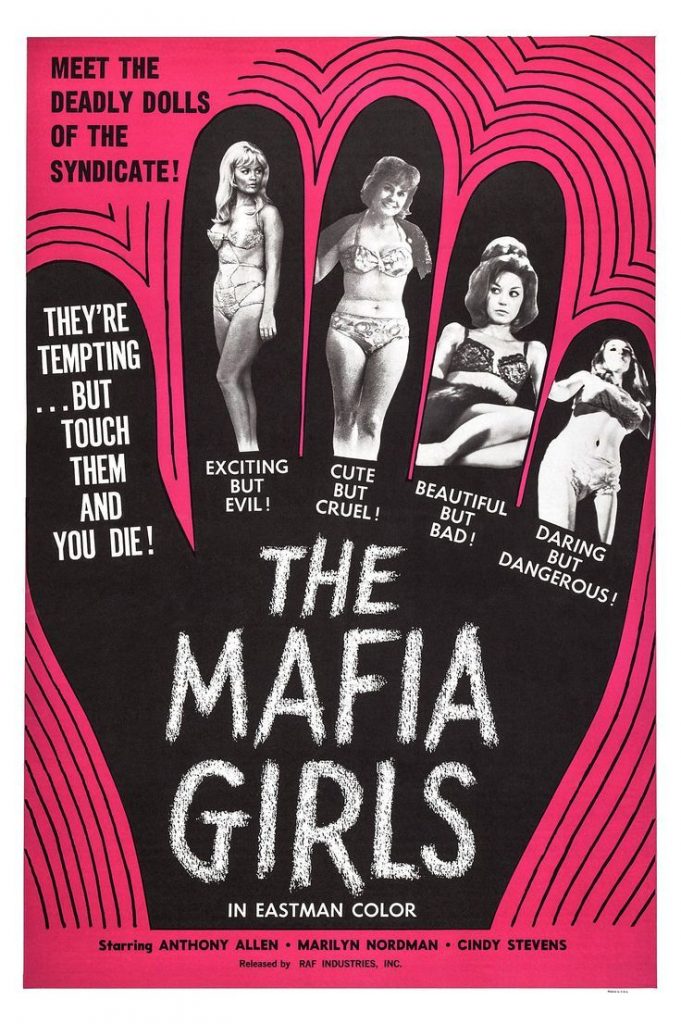 You can’t fake the amateurism of MAFIA GIRLS, a deservedly forgotten no-budget Florida artifact from the ’60s. Same filmmaker (using that term most broadly) Norman Senfeld did STORM TROOPERS USA, another title resurrected by Something Weird Video that I have at home, waiting for a torrentially rainy day to view & review.

Instead of beginning with a “grabber”, film opens with a deadly dull succession of narrated killings, all poorly staged, purporting to be rub-outs of international spies. The crappiness of technique is astounding, and the repetitive writing of the “FBI”-style narration is beyond bad.

This dull exposition is repeated and recapped immediately in a post-credits sequence of a guy, standing next to a map of the world, laying out the background for his team of undercover agents.

Film proper begins at the Lucerne Hotel in Miami Beach where real-life Peppy Fields is performing. She’s a fourth-rate Sophie Tucker type, and good indicator of the non-entertainment in store for us for the next hour.

There’s a tedious subplot about mafioso Lassiter and his pimp henchman Jerry, but the film is so poorly done that even a scene where all the girls take their tops off is carefully edited to cutaway each time, reducing the content to G rating-level -counterproductive for an exploitation movie touted as “for Adults Only” (at least according to the SWV packaging).

Sleaze quotient is devoted to the fate of prostitute Sherri, essayed by Florida nudie favorite Delores Carlos. She is callously assigned to service a known woman-beater Stitch (supposedly a German war criminal, poorly played by Paul Stober) who mutilates her and leaves her for dead (all off-screen of course).

In fact anything of potential interest is relegated to off-screen here by director Ed Ross, who SWV’s resident expert Frank Henenlotteer pegs to be merely a pseudonym for producer Senfeld. There’s a gun battle which looks like one shot by 9-year-olds for a backyard home movie, and the Miami Beach police lieutenant turns out to be a sadist in the final reel, not good for tourism.

Before wrapping up and putting this in the can, Senfeld belatedly tosses in some gore for the fans as Stitch carves out his boss’s eye, before getting his own comeuppance. Worst acting honors go to Ruby Ross as Jan, an ugly harridan whose maniacal giggle is memorably awful.

A key role is played by Marcel De Lage as an FBI man posing as an untalented pianist/singer with heavy French accent. It isn’t surprising when the bad guys get wise to him. De Lage is also credited as starring in a lost film THE NIGHT HUSTLERS made by Bobby O’Donald, who takes many credits on MAFIA GIRLS including story, screenplay, music and editing. I hope it stays lost.

Marilyn Nordman as Millie is distracting with deep décolletage as a call girl. Jerry, a sniveling swine of a pimp, is well-played by the late great director Bob Clark, back in his early Florida days. I miss this talented guy, who along with Delores Carlos brings the only notes of professionalism to this sorry project.