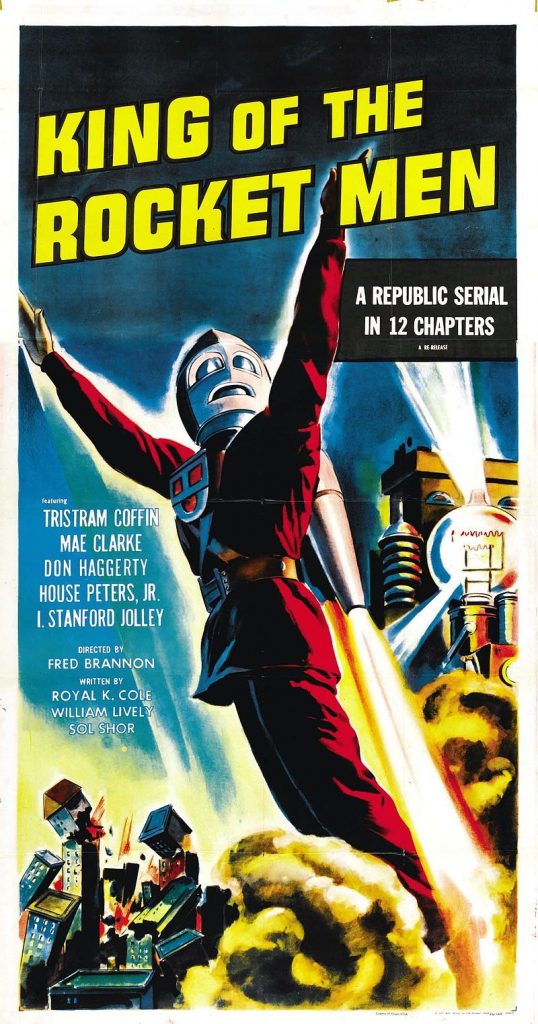 1949’s “King of the Rocket Men” was the first of three serials from Republic Pictures featuring a man wearing essentially the same rocket suit and helmet. The other two, both released in 1952, were “Radar Men From the Moon” and “Zombies of the Stratosphere.” All three have things going for them though, each time, Republic tried to reinvent the character … Jeff King in “King,” Commando Cody in “Radar,” and Larry Martin in “Zombies.” The first and second serials were later revised for different purposes. “King of the Rocket Men” was edited to remove the cliffhanger sequences and the “remember when” episode (the one which is primarily flashbacks of prior chapters) and re-released it as a feature film titled “Lost Planet Airmen” in 1951. And “Radar Men From the Moon” was released as a 12-episode TV series under the new title, “Commando Cody: Sky Marshall of the Universe” in 1953. The third serial, “Zombies,” while not remade, is probably the best remembered since it marked the science-fiction feature film acting debut of Leonard Nimoy (later, Mr. Spock of Star Trek fame) playing Narab, a Martian zombie.

But, “King of the Rocket Men” was the best of the three. Especially during 1949 and subsequent years, it was far more believable to envision a potential traitor, blackmailing government entities and possibly selling secrets to a foreign power than to believe in invaders from the Moon or Mars (in “Radar” and “Zombies,” respectively). Also, and this is just my opinion, the two later serials seemed a bit contrived … like they were merely attempting to cash in on the success of “King” … a very well-acted serial for the time with an iron-clad plot line.

So, why the 8 of 10 rating? Back in 1949, money was tight in the studios. And sometimes, it was cheaper to “buy” special effects than it was to make them. That’s exactly what Republic Pictures did. Since they wanted cataclysmic special effects in the last chapter but didn’t want to spend the money, they simply bought rights to the 1933 film, “Deluge,” for the sole purpose of borrowing the special effects footage for use in “King.” And while there’s nothing inherently wrong in such a practice (it has been done many times by Hollywood), it almost forced “Deluge” into obscurity. There were very few copies of “Deluge” available and, after Republic borrowed the scenes, they trashed the rest of the footage.