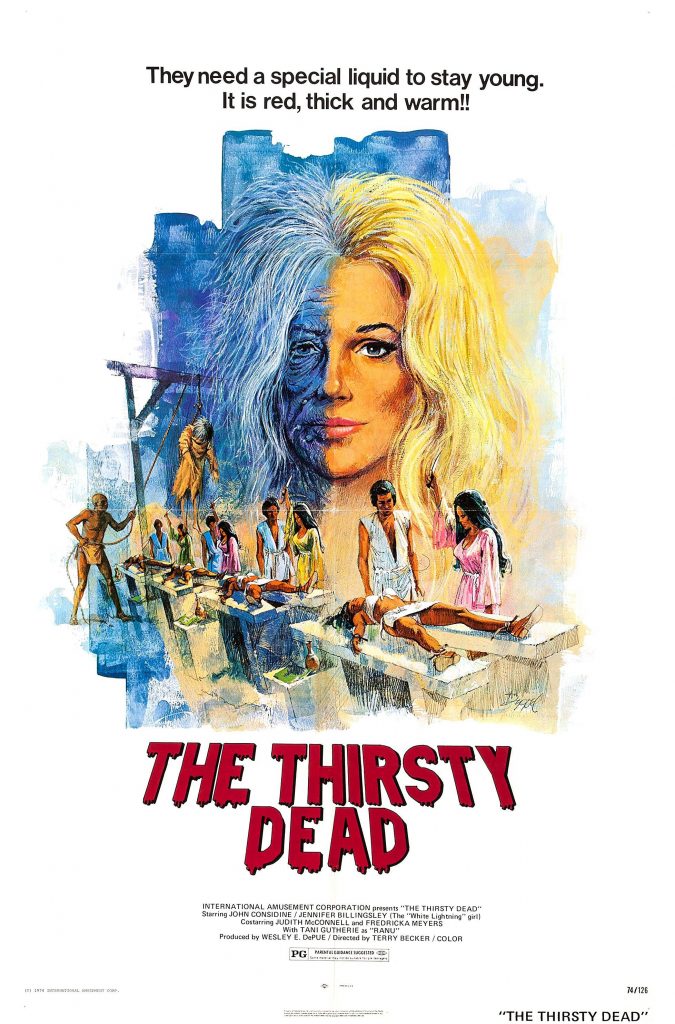 This was included in the “Living Dead” 9-film collection I rented; however, there are no zombies here  and the title itself isn’t a reference to anything in particular! The Widescreen print of this one was the best-looking from the four titles I watched  but the same can’t be said of the film, which is perhaps the least of them (certainly the campiest, particularly where costumes are concerned)!

Starting off with a White Slavery-type plot, it soon falls into formulaic “She” territory  involving a lost civilization who has achieved immortality (presided over by a disembodied living head preserved in a block of ice!). This gives it an old-fashioned air (the film is remarkably chaste) and makes the whole incongruous alongside the permissiveness prevalent in exploitation/horror fare of the time (though, at least, three of its female protagonists look good in skimpy jungle attire).

One of the women happens to look just like the painting of a blonde who had appeared to these enlightened people in a vision  so, instead of draining her slowly of blood, they want her to join their fold and be initiated into their lifestyle (which doesn’t sit well with one of the girl’s companions, a go-go dancer, who would love to exchange places with herespecially since the heroine will have no part of this deal!). A high priest falls for her and, eventually, helps the survivors escape (and liberates the imprisoned old hags, remnants of their ‘experiments’ over the centuries)  except that, once he gets near to the modern world, starts reverting to his real decrepit age!

The film offers no surprises whatsoever but, what really gets it down, is a serious pacing problem  being not so much slow-moving as ineptly-handled, the direction showing a distinct lack of judgment with respect to cutting where it could benefit story and suspense the most! For the record, I followed this with a bunch of trailers included on another disc in the set: I was particularly enticed by the ones for THE ASTRO-ZOMBIES (1968)  for how bad it appears to be, not to mention the momentous pairing of John Carradine and Tura Satana!  and THE CHILD (1977)  yet another EXORCIST clone.