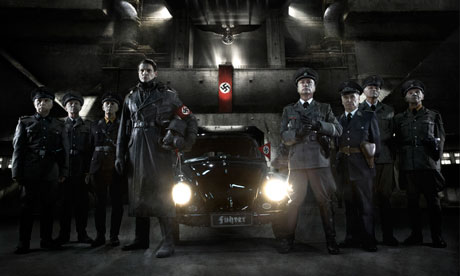 Nothing about this Finnish-derived space oddity, opening (and closing) next Wednesday, quite matches the genius of its tagline: “In 1945, Nazis went to the moon; in 2018, they’re coming back”. Timo Vuorensola’s film uses its B-movie plot – an American lunar mission stumbles across a swastika-shaped HQ near the Sea of Tranquility, causing its inhabitants to launch a renewed counter-offensive on Earth – as a pretext for silly gags. Some are satirical (the Party has used the hiatus to rebrand themselves as caring, sharing oppressors), some are old-hat, a la “Don’t Nazis have preposterous-sounding military ranks?” High on energy, bluescreen and careless acting, it’s marginally more inspired and certainly more likable than Snakes on a Plane or The Human Centipede as net-spawned exploitation fodder goes, but you can safely wait for the DVD. It’s out a week on Monday.