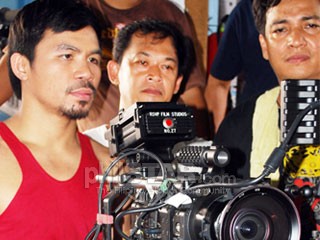 Manny Pacquiao has played superhero in a bright red costume and a stubborn rebel commander in movies he produced in the Philippines.

The next time he stands in front of movie camera he will play the role of a gangster, for a Hollywood film titled “Brass Knuckles.”

No, Pacquiao won’t come out shooting people and wrecking half the city in the coming movie which stars Fil-American Rob Schneider of Deuce Bigalow, The Hot Chick and Grown-Ups.

Schneider is a top-rate Hollywood comedian, and while the movie with Pacquiao will delve on the illegal drugs trade, it spells a lot of fun.

Pacquiao is in the hot seat for his stand on same-sex marriage. At the same time, he’s deep into training for his June 9 fight with Timothy Bradley.

ABS-CBN North America News Bureau breaking the news of Pacquiao’s coming movie, which starts filming after the Bradley fight, is like a whiff of fresh air.

“We’re going to work with him then wrap up post-production in August, September and the film should hopefully be out by the end of the year,” the producer added.

He assured everyone that Pacquiao will play a nice role, and with speaking lines.

Also in the film are Academy Awards winner Benecio del Toro and Jacob Vargas. With the presence of these stars, it certainly is no B-movie.

Pacquiao loves to act, even if the movies which he produced didn’t do well, in fact they did bad, at the box office.

The movie will be directed by Erick Geisler, a two-time Emmy Awards winner.

Pacquiao was recently in the news, not for his coming fight, but because of his stand in the touchy issue of same-sex marriage.

He found himself in the eye of a storm when a Filipino writer based in the United States made insertions in his story, in that gay people “must be put to death” and appeared like it was Pacquiao who said it.

Pacquiao denied saying it, and the writer has made the necessary clarification.