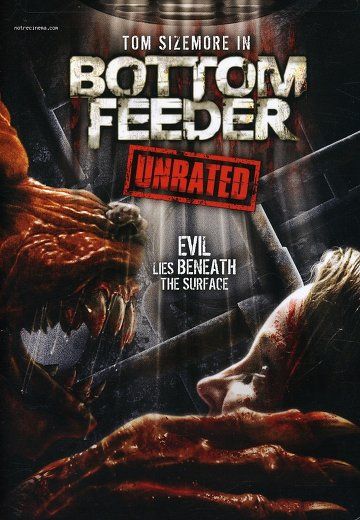 Working on a clean-up crew, several workers are assigned to a new job at an abandoned medical testing lab and after going through the facility are ambushed by a large creature living in the tunnels from a chemical drug that turned it huge and feral and set out to get away from the creature.

There was some good stuff to this one when it got around to it. One of the better aspects is the film’s incredibly creepy location, as the fact that they’re in a sewer-system is a big plus. The building they use to access them is already quite creepy, but it looks really great here due to this one effectively looking like an abandoned building should’ve been, with the appropriate amount of decay present with the other little things that would be found in a sewer to begin with but simply rotted away due to time, which is a very nice touch. That it’s also dark most of the time seems to work well for this one, meaning that it’s just an incredibly suspenseful location and mixed with the corridor of tunnels down there and the overall look to it, this one comes out rather nicely. There’s also a nice bonus here in that, although it deals with a giant rat, it’s not created in the traditional sense and instead is brought about through the chemical tests turning the individual into a monstrous creature and is much better than having a gigantic swarm of rats doing the killing. The confrontations with it are even better, as the encounters down in the creepy sewers provide a lot of fun times and generally seem highly enjoyable. The car-park one is one of the best ones, and the shootouts in the corridors work amazingly well at getting a lot of good action into this one. Even the surprise jumps from the creature attacking out of the shadows generate some fun, and the conclusion scores rather nicely before veering off. The last plus here is the film’s incredibly high gore content, which gets bloody when it wants to. These here the film’s good points. There were a couple of problems with this one. One of the biggest ones is that the film doesn’t have a whole lot going for it during the beginning part. It’s just far too long and not all that entirely interesting when it presents its opening, going from the run-down with the chemical to the meeting between the two parties and the aftermath of that to getting into talking about the mission from the crew, it takes about thirty minutes before even going down into the sewers. Since the rat isn’t the first thing done down there either, there’s not a whole lot of interesting things going on through these parts of the film, and it just makes these parts of the film drag on for some time before it gets really good. Another problem is that there’s not a whole lot of clarity when it comes to dealing with the creature’s attacks. Most of them are either over so quick it’s hard to tell what happened until the aftermath, too dark to render anything visible, edited so haphazardly it’s impossible to see anything or a combination of them, and a few suffer from all those factors which are unfortunate as they were set-up to be among the better scenes until the flaws kicked in. The last flaw here is the film’s incredibly stupid ending, which has almost nothing right going for it and is just all-around bad, no matter how it’s looked at.