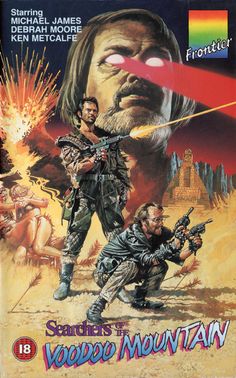 After a nuclear war has decimated the planet, the few surviving inhabitants are forced to fend for themselves. As a result of these harsh circumstances a small group of men led by a man named “Trapper” (Michael James) wander the wastelands looting and killing whoever gets in their way. As it just so happens, while in the course of their wanderings they come upon another group of bandits and with the help of a stranger named “Anuk” (Chito Guerrero) manage to kill most of them and take what few supplies are available. Anuk then tells Trapper that he knows of a place where there is plenty of food and water for everybody. Upon hearing this the group eagerly follows Anuk as he leads them into the jungle where they encounter hostile savages, pygmies and mutants. Now, rather than reveal any more of the film and risk spoiling it for those who haven’t seen it, I will just say that this was a low-budget movie which had a good plot but suffers greatly from bad acting, ridiculous action sequences, absurd costumes and extremely basic special effects. Even worse is the fact that the director (Bobby A. Suarez) had a bevy of attractive, scantily-clad women which he essentially chose to ignore so that he could focus onyou guessed itbad acting, ridiculous action sequences, absurd costumes and extremely basic special effects. How sad.