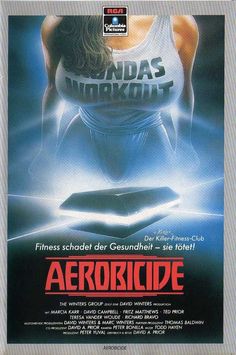 Now this director knows how to sell sleaziness.Still a far cry from the Italian sleazy gialli but more than enough to give this bad movie the spice that it needs.Let there be no doubt about it.This movie is bad.Real bad.No,not the Michael Jackson kind.I mean it could be considered awful.But it is so bad and awful that it is good.I mean I laughed almost throughout.It went from one hilarious scene to another.Which was intensified by the fact that everything was taken seriously by director and the actors.Resulting in a parody of the slasher genre without intending it to be.Pay special attention to the detective who thinks of himself as a hard boiled and intelligent cop who is amazingly stupid.There is not one moment in the film where you can look at him in action and say now that is some fine acting.Not a hint of damn,”I got to pay the bills that is why I am in this rotten movie”.On top of that the director tries to make a film that combines all the Eighties goodness or badness whatever you prefer resulting in something that I could describe as one huge mistake. Slasher,kungfu flick,crime film,flashdance type film,you name it is there.And of course enough crotch and boob shots to please the people who like that sort of thing.Who me?I can’t deny giggling at some of the gratuitous shots made.It was like,”we are serious film makers trying to film scenes where serious actresses portray some difficult exercises and these are so difficult in fact that the camera has trouble recording them so we have to zoom in to spots we know very well to get back on the right track.Well,we got lost a lot of times.”Or some other excuse like this.OK,I admit it I was expecting these shots and thank god they were there.Otherwise the film would not have been nearly as entertaining as it was.Do I really need to explain to you why Killer Workout is not a proper slasher or horror film? Even when there was enough present to come close.From start till the ending you will be entertained by the randomness of the events and more so when the killer and the motive is revealed.It is beyond ridiculous.But it won’t matter much since you had fun for 90 minutes.