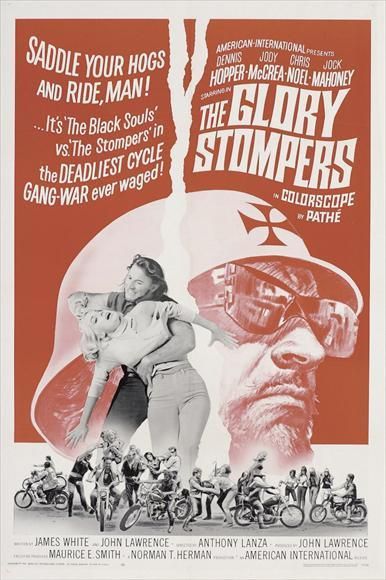 “Darryl” (Jody McCrea) is a member of the motorcycle gang called the Glory Stompers. One day while walking with his girlfriend “Chris” (Chris Noel) he is severely beaten up by five members of a rival gang called the Black Souls. Believing that they killed him and not wanting any witnesses, the leader named “Chino” (Dennis Hopper) decides to forcibly take Chris with them to Mexico where she is to be sold into prostitution. What Chino doesn’t know is that Darryl’s wounds weren’t nearly as critical as he initially thought and upon gaining consciousness Darryl is determined to catch up to the Black Souls and get Chris back one way or the other. Anyway, so much for the rather standard plot. As far as the overall movie was concerned, I will just say that it was okay as far as biker films go. Naturally, Dennis Hopper performed in his usual energetic manner which helped add a little life into some of the slower scenes. Likewise, Chris Noel–and to a lesser extent Astrid Warner (as “Doreen”)–definitely added some nice scenery along the way as well