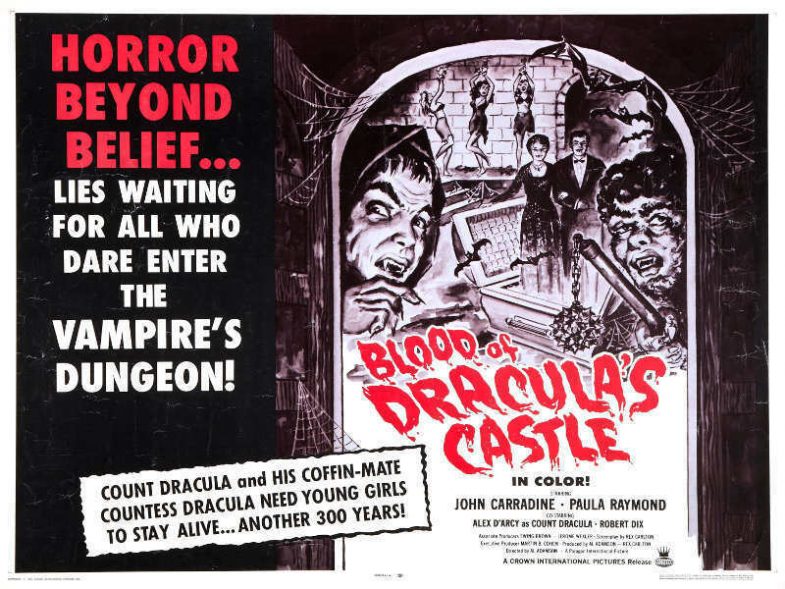 Dracula isn’t going by “Dracula” these days, and his castle isn’t really his, it’s rented, and it isn’t really a castle, but just resembles one. And while there is blood, remarkably Dracula is now so leisure-class that he has servants extract blood with needles from his victims and serve it to him (and his wife) in wine glasses.

A young photographer and his model fiancé take some photos at Marineland (are walruses and seals sexy?). He inherits a “castle” from a 108-year-old relative. They decide they’ll live and work out of the castle without having seen it, and that they’ll have to evict the old couple who’d been renting it.

Meanwhile, at the castle, mute hunchbacked servant Mango (!?) and genteel butler (and moon god Luna cultist) George are acquiring female “guests” to chain in the basement to keep a ready supply for their vampire bosses. The vampires realize they’ll have to get the young couple to let them stay in the castle one way or another.

Also showing up is the vampires’ friend Johnny, a homicidal maniac. Just on his way to the castle, he kills four people, and that’s when he’s on his best behavior! Repeatedly, it is said that he’s worse when there’s a full moon. He’s not a werewolf, though.