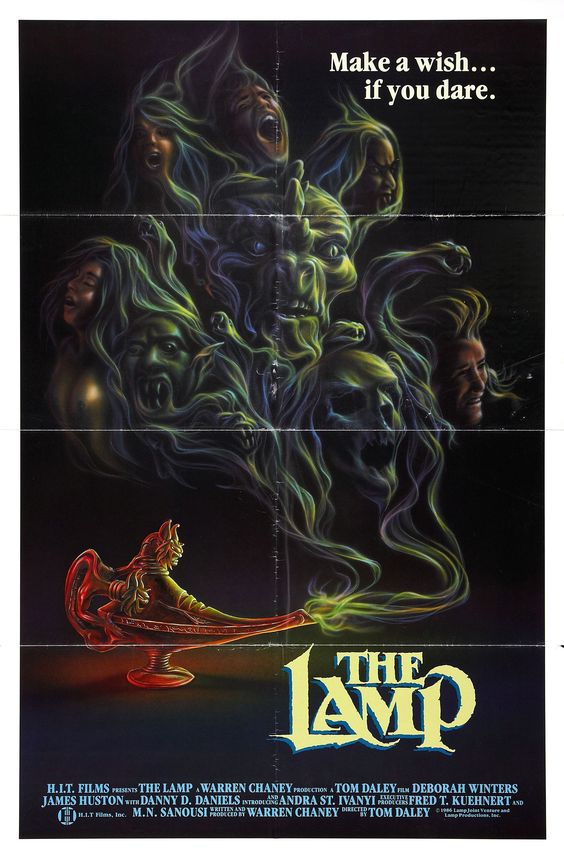 Robbers break into an elderly lady’s house, and uncover an exotic artifact in the shape of lamp. They murder her, and then they unknowingly unleash a Djinn from the lamp and they would follow her fate. Soon the lamp finds itself at a museum, where a bunch of students secretly decide to spend the night and would become the next targets of the rampaging djinn.

The Lamp (aka The Outing) has an unusually sound (if simple) concept, largely brought down by its mediocre execution and formulaic inclusions. It starts off decent to only have its interest slowly fade due to its low scale plot developments and lumpy mid-section (focusing on a bunch of rather boring kids), but then the final third erratically erupts (rather gruesomely and incoherently) with a baffling freeze frame closing. However, gladly the numerous (some silly, but a couple remained effective) death scenes provided some inventiveness with a certain splash of nastiness and blood. While the special effects (glowing green mist) and make-up FX can be on the hokey side (a stiff, but towering Djinn), they still had a lively charm to them that reeks of its decade. Director Tom Daley’s creaky direction doesn’t use the compact locations (and a museum would be such a great setting for this carnage) all that well with little in the way of suspense, due to the uneven pacing that didn’t help much in the build-up and atmosphere is barely evident with only a few lasting pockets. At least the quick, swirling camera work adds in some much needed verve and a sense of urgency, despite the routine POV framing. The performances are woeful, but not enough to destroy the viewing. Andra St. Ivanyi leads the way, with James Huston and Deborah Winters in lesser support.