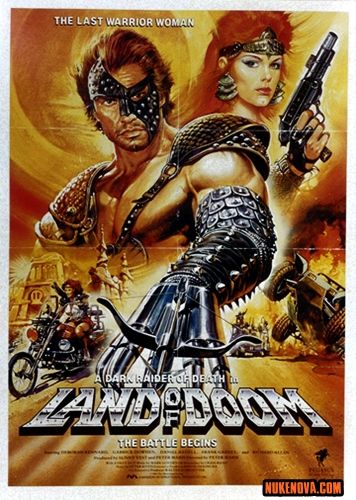 Land of Doom definitely has one of the better titles going for it in recent cinematic history, but that’s about all it can muster.

Take your normal plot. Let’s use some symbolism, and have it be a puppy. During the movie, you watch the puppy grow. There are exciting parts, like when the puppy chases some squirrels around, or sad parts, where the puppy whizzes on your favorite Duran Duran album. By the end of the movie, the puppy has become an adult dog, hopefully soon to spawn other puppies, AKA sequels.

Land of Doom, unlike a normally aging dog, is basically a set of drunk dogs, wandering aimlessly, bumping into walls, and not only whizzing on your Duran Duran albums, but also the Mona Lisa and all vestiges of modern civilization. By the end, instead of a healthy, happy dog whom you love, you’re stuck with a brain dead puppy who is busy chewing off its own tail. Pathetic, yes. But that’s Land of Doom.

Don’t see this movie. Seriously, it just wants your soul. I mean, it doesn’t even actually end. You know how a movie reaches the point where you know the big climatic fight is about to begin? In Land of Doom, that moment arrives, the heroes run away, roll credits. Thanks, movie!