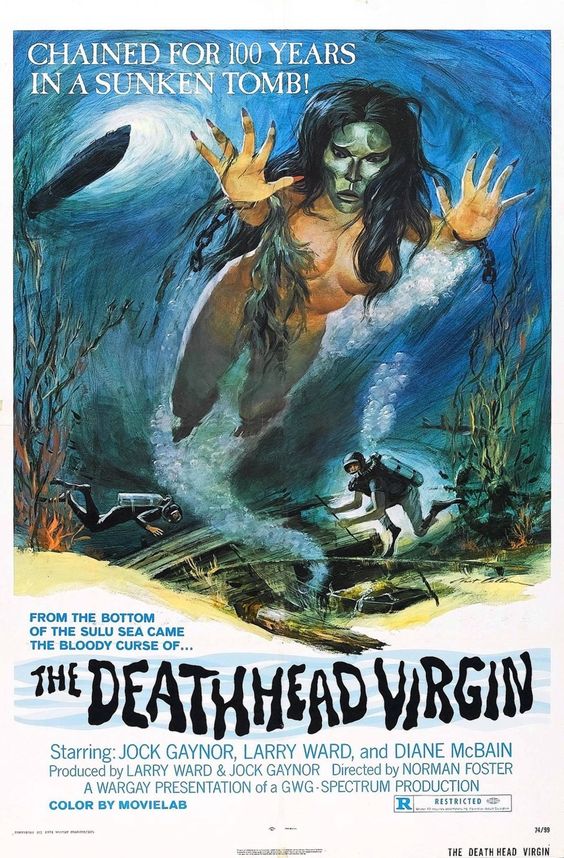 With a name like The Deathhead Virgin it was pretty much inevitable that one day I would sit down to watch this one. I’m one of those people drawn irresistibly to films with cool names, regardless of their quality I can just dig the feeling of watching a movie with a good name. This one gets pretty lousy reviews all round with good reason, not good, nor dysfunctional enough to pull off many classic bad movie tricks, The Deathhead Virgin merely goes about its business in its unassuming cheapie fashion and switches out to no fanfare after some 93 minutes or so. The plotting is actually kinda interesting, there’s the odd twist and an ambition to the process that really could have done with some money, or better yet more concentration on the elements that work and editing for the bits that don’t. The discovery of a supposedly Spanish wreck with attendant fake skeleton (seriously, it doesn’t even begin to look like its anything more than a plastic model, so pristinely white and undamaged is its look) and some treasure sparks the return to life of a cursed virgin princess, possession and a spot of murder. Made in the Philipines, I guess the Westerners of the cast all liked the sunny location as there are scenes of various merry making, dancing and characters simply hanging about, which given the inherent interest of the locality isn’t as boring as it might be but still rather puts the kibosh on any actual suspense. There’ brief nudity and a little smidgen of gore but the murders are poorly staged and shock value is low. On the plus side, there are some fun cheesy solarisation visuals and the appearances of the titular boogeychick (is that the feminine of bogeyman?) are good for a few laughs, surprisingly for such a film she actually looks very close to her depiction on the posters, i.e. pretty cool and heck, once or twice even a little bit creepy. Mostly this film is weak stuff, never wild enough or bad enough, interesting images and ineptly handled schlock nuggets nestled amongst the padding and attractive women in bikini’s aside there isn’t much good here. I found it watchable enough, but it truly ain’t great, worst of all is that it isn’t even that funny. Well, it does bust out a ribtickling attempt at a bona fide action showdown at one stage that raises the pulse a little, but the effort would have been better used in the service of more horror goods. Larry Ward and Jock Gaynor can be blamed for a good deal of things, since they wrote and starred in the thing and their acting is non-charismatic and the script too drawn out. Director Norman Foster appears to be some kind of veteran in the profession but I can’t say as his experience was visible on screen. I wouldn’t really recommend this to anyone, but on the other hand I didn’t dislike it nearly as much as I expected to, maybe its my love of really bad films, especially ones that sling a bit of cheapskate exotica around (fan dances for the win!). I was never quite disengaged, I smiled at times, I was even mildly entertained. But I can’t really credit too much to the film, much as I’d like to.