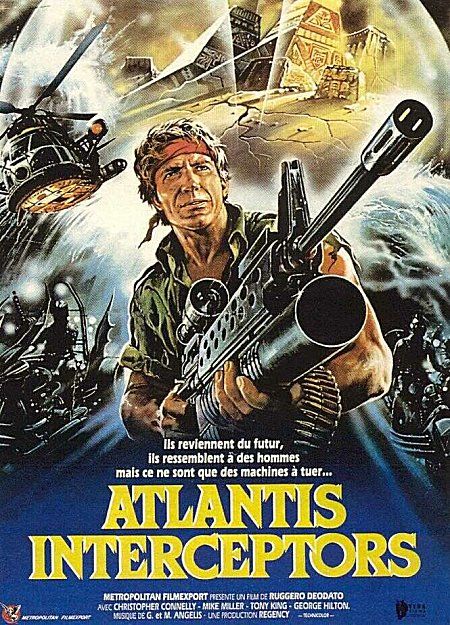 It actually looks more like Miami, Florida 1984, but who’s counting. Over a Super Fuzz like disco theme song, we get the Circle Line tour of Miami via water and air. Two guys (we later find out these are our “heroes”) break in through the front door of a house, commit several acts of murder, assault and one act of kidnapping. They escape through the front of the house. We never get any real background on the two men other than the following : Mike (played by a leathery-looking Christopher Connelly) and Washington (but please call him by his new name, Mohammed) are ex-military privateers/mercenaries. The initial mission they were on was for someone called the “Colonel”. After getting paid for their services, they are off to Trinidad on a boat for R&R.

At the same time, an attractive Dr. Rollins (Gioia Scola – another veteran of Lucio Fulci’s Conquest) is forcibly transported via helicopter to a military research platform at 68 N – 28 W (middle of the ocean) to investigate a crazy artifact that was found when a Russian sub crashed. The artifact is reportedly 12,000 years old. She deduces that the artifact is a “Rosetta stone” for Atlantis, using a pair of tweezers, a small magnifying glass and a slide show. As they attempt to bring the submarine to surface, a giant storm breaks loose which sinks the platform. Also a “model of an island in a plastic bubble” apparently rises from the ocean. Mike and Washington (I mean Mohammed) rescue the survivors of the platform, including the attractive Dr. Rollins. At this point the cabin boy, Manuel, has a minor freak out and jumps ship.

The crew end up back on land and they discover a city that has been totally devastated. It was caused by a group of rejects from the Auto and Gun shows that dress like an offshoot of the Village People’s leather guy, with lots of shimmery golden makeup and crazy haircuts. Their leader wears a transparent skull mask, leather vest and neck guard and carries a riding crop (even though he rides in a 50’s Ford with the Ben-Hur modification to the wheels). At first he just attacks, but later he reveals the plot.

Apparently they are Atlanteans and they’re back. These xenophobic Atanteans are on a Greenpeace mission to kill everyone (except 1 person) and reclaim all that was theirs. It took 52 minutes to find out what this movie was about, but better late than never. We then get Assault on Drug Store 13. Somehow the Atlanteans kidnap Dr. Rollins and it’s up to our wrinkly hero to rescue her. How do we do this ??