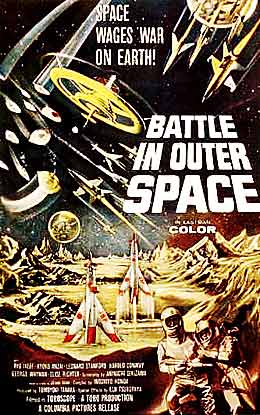 I saw “Uchu daisenso” or as it was titled when I saw it, Battle in Outer Space” when I was a kid- a long time ago. Now of course the inevitable comparison to modern space operas will reduce the impact of this simple picture, but taken in the context in which I first viewed it, this was a really cool movie. For starters, it was in glorious color, a rarity in sci-fi in the late 50’s I can tell you. I saw a lot of horror and sci-fi movies when I was kid and color was rare. And like most Japanese sci-fi imports of the time this was the whole world united against the invading alien hordes. Yeah a little like Independence Day but In “Uchu daisenso” the United Earth already existed. It didn’t take an invasion from outer space to unite the planet. Good (relatively speaking!) effects, a noble if simple plot, combined with beautiful Eastmancolor and this was the perfect drive-in movie.