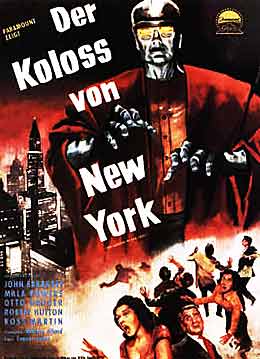 The impressive title work is the viewer’s first clue that producer William Alland and director Eugene Lourie squeezed considerable artistry and style from a shoestring budget. Look past the economic limitations; the suspenseful and imaginative story involves the death of a humanitarian genius whose father (a famous surgeon) and brother (a robotics expert) team up to keep the genius’ brain alive in a robot body (well designed by ace effects artist John P. Fulton). The film’s message concerns the nature of the soul and the role which physical sensations play in making humans act humane. Other affects by Fulton include one of sci-fi cinema’s best death rays. All in all, a moving and intelligent movie