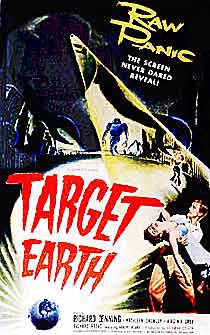 The fifties were the decade for the teenager. He/she had money and time to spend on just about anything. So Hollywood stepped in to fill part of the void.

I like the fifties an sixties sci-fi and horror flicks because, not like today where special effects and schmaltz are a major part of the movie, in the fifties and sixties, things were a lot simpler and people “really”(?) had to act even in B movies.

There wasn’t that much gore as there is today. The black and white film added to the atmosphere. Just enough of a monster scene was shown for your mind to fill in the blanks.

We didn’t have to see bodies being blown apart.

This film was filmed during the Cold War and UFO paranoia and people just gobbled it up. One thing I like about these type of films and that is that somehow the enemy, whoever he or she is, will always get it in the end and our hero or heroes will come out on top.