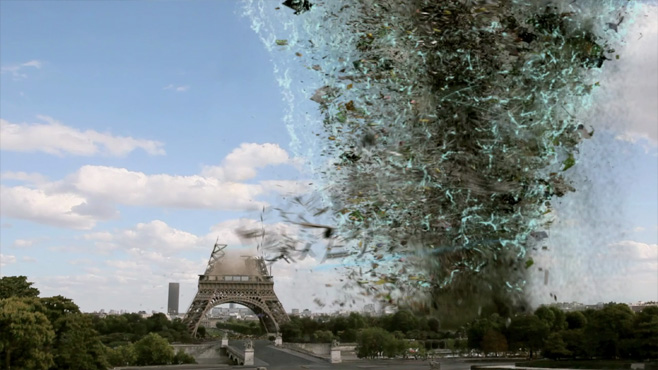 The phrase “metal tornado” does not refer to, quite sadly, the signature kill move of Matalder, the hero of the cult Japanese fight program Choujinki Metalder (1987 – ’88). It is also not a reference to the Serbian metal band Tornado, which sometime describes its particular brand of glottal, lung-bowel rock as Byzantine Metal. Instead, Metal Tornado is a 2011 Sci-Fi Channel original movie (or “SyFy Channel” if you absolutely must), which is most certainly directly descended from 2002’s Atomic Twister. Both films have the following in common: they are both massively cheap, they both feature fading ‘90s TV stars (Twister had Mark-Paul Gosselaar, Tornado has Lou Diamond Phillips), they’re both rated PG, they both feature the most dubious forms of pseudo-science imaginable, and they both have titles that sound like sadistic playground torture maneuvers that bullies used to use on you back in the 6th grade. Perhaps we’ll get a SyFy original movie someday called ElectroMelvin with Corin Nemec. Or maybe Death-Noogie with Tia and Tamara Mowry.

I’m not sure if there’s any real pertinent information I can give about Metal Tornado. It’s exactly what you’d expect a PG-rated, Sci-Fi Channel Original Movie to be. It’s cheap, it’s dumb, and it plays like a distant echo of Irwin Allen’s joyously stupid disaster-themed TV movies of the 1970s. I would perhaps recommend it if you were up too late on a Friday night, and had just guzzled a 2-liter bottle of strawberry Fanta to chase down Skittles pizza you had earlier, but even then, it wouldn’t do you any favors. Metal Tornado is like the most disappointing gumball you’ve ever had. True, you didn’t pay much, and you have no right to expect something remotely satisfying or nourishing, but you weren’t expecting something that bland and flavorless.

So Lou Diamond Phillips plays a vaguely masterful scientist named Michael who has developed a way to harness the power of solar flares for the good of mankind. His expertly placed satellites catch the solar flares on their solar panels, and then beam the captured energy down to Earth to be stored in vast underground batteries. While this sounds like a massive undertaking, all the exposition is given very quickly and efficiently, making it seem like Michael had only thought to do this the week previous. The sets are all small and cramped, and the dialogue is flip and casual. The magnitude of this undertaking sounds about as large as making a soufflé. This solar flare-capturing process is owned by a corporate douchebag played by Greg Evigan from My Two Dads and the short-lived TekWar TV series. Michael also has a love interest in the form of Nicole de Boer from Star Trek: Deep Space Nine. Her character, sadly, seems to have been born without a personality.

Anyway, on the maiden voyage of the solar flare-capturing machine, the scientists accidentally absorb too much energy, and 2% of the sixty-billion megafloons of energy ends up going rogue, and manifesting itself as a big spinning magnetic funnel, about the size of a proper tornado, that sucks up all metal objects. As it travels around the Pennsylvania (Ottowa) landscape, it absorbs cars and pitchforks and running chainsaws, making for what is essentially a giant, vertical thresher. Sounds pretty cool, I guess.

Sadly, the film is hamstrung by its low budget, its hammy acting, its bad science, and its all-too-gentle PG rating. There’s not enough leeway for proper violent mayhem, and not enough permissiveness to allow for even a gratuitous nude scene or two. If you’re going to make me sit through a crummy, low-budget cable TV movie, I’m going to demand at least four bare breasts. In the same scene if possible. If not breasts, how about a flying pitchfork screaming headlong into someone’s midsection? Is that so much to ask? All the blood in Metal Tornado is relegated to gentle spots on the forehead. Ever since the late 1960s, this has been standard issue for B-movies. Heck, there’s not even a rocking soundtrack. You’d think with a title that sounds like Anvil’s next record, there would be a lot of metal guitar solos. No such luck.

But maybe it’s here that I’m making a misinterpretation. The small sets… the low budgets… the bad special effects… Perhaps Metal Tornado is trying to recapture the bad sci-fi films from an earlier era. Indeed, with a few adjustments for colloquialisms and modern technologies, this film could have been made in 1954. The scientist is the typical egghead who is required to spew out the most absurd technojargon this side of The Killer Shrews. The love interest is pretty and has nothing of significance to add. Even the cop is the usual sh*tkicking hick we’ve seen hundreds of times before. The actor who plays the cop, by the way, seems to have a noticeable cyst on the left side of his neck about the size of kumquat. Once you notice it, it’ll be hard to look away. But if you’ve been longing for a bad 1950s B-movie, and you’ve seen too many of the genuine article, Metal Tornado may serve as a refreshing revelation that such crappy movies are still being made at this late date.