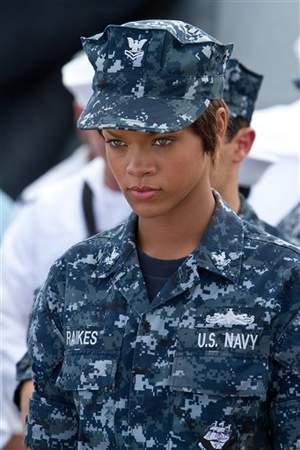 I’ve always hated the game Battleship. It requires no skill whatsoever and does little to pass the time.

In that sense, I guess you can consider Battleship a marked improvement over the source material. Not that it’s any good—of course it isn’t—but it’s certainly more exciting. Directed by Peter Berg, the man who most famously brought us Friday Night Lights and, to a lesser extent, Corky Romano, Battleship boasts the all-star cast of Liam Neeson, Brooklyn Decker and Rihanna. Guess which one was actually cast for their acting abilities. Anyway, here’s the deal: imagine Transformers and Pearl Harbor had a baby. Seriously, close your eyes for a second—just for a second. Don’t lose me. What you just imagined was Battleship. Like what you saw? Then read on to hear more. Can’t think of anything less appealing than some grade-B robot-on-rowboat action? Congratulations, you just saved yourself a $10 movie ticket. Seriously, it really is that simple. The movie begins much like the game never does: with a bang. After some incredibly flashy opening credits (advertising twice that this is a Hasbro property), some scientists discover odd phenomena orbiting around the sun and decide to contact it. You can probably assume what happens from here. Boom! The aliens invade. Bam! The humans fight back. Bang! All hope is lost. Whoosh! A miracle occurs. Commence the back-patting. You’ve seen it before and you’re about to see it again. Thankfully, Battleship knows the clichés and decides to play with them. Unlike Transformers, some of the humor here is actually intentional.

Playing like the most expensive B-movie ever made, the film offers a surprising amount of chuckles and self-aware absurdity. When both the extraterrestrial and human ships lose control of their radars, forcing one another to “guess” the other’s coordinates, the film isn’t intending for itself to be taken seriously and, regardless of how bad the rest of the movie might be, that’s a decision worth praising. The tone here is primarily genial, especially in comparison to its Hasbro cousin, the Transformers series, and Battleship benefits greatly from it. Now, onto the bad news: just about everything else. The acting is played far too seriously for a film of this nature; the soundtrack is oddly resonant of the deadly sonic sound waves sent by the antagonists to destroy all of mankind (probably not a good thing); the film’s “life lessons” teeter on overbearing. They attempt to squeeze morals into a film based on Battleship. In short, if you absolutely must see an action film this weekend, Battleship isn’t the worst decision on the market. I’d still take seeing The Avengers for a fourth time over this any day of the week, but I’d be lying if I said this film wasn’t surprisingly enjoyable to some degree. Again, that’s more than I can say about the game this film is based on. I guess you can consider this one a mild success—extremely mild.