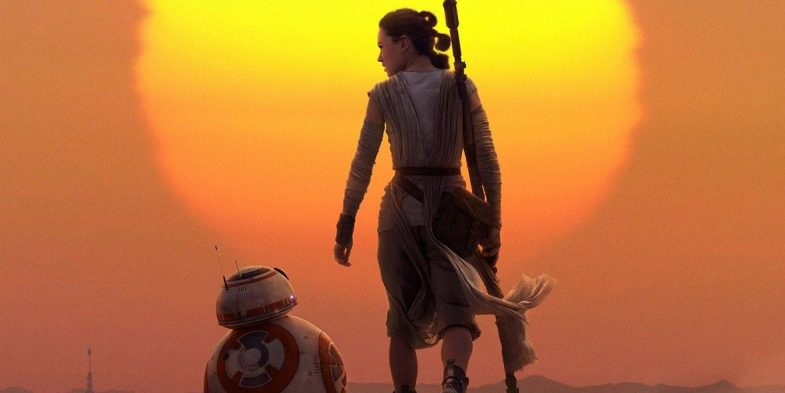 The twin suns of the planet Tatooine began to descend. Rey, the last of the true Jedi knights stood in a slight silhouette against the two setting suns. A music crescendo and the movie’s credits began to roll. A slight bit of moisture formed around the corner of my eyes as it began to sink in that I was the end of a cinematic quest that had begun in June of 1977. I loved the final chapter of the Star Wars saga. I thought it thoughtful respectful with the right dose of reflection. This was the culmination of playing the Star Wars Album on my sister’s record player and consuming all I could on Star Wars in STARLOG magazine and other fine publications. This moment clearly defined why I love movies.

I had entered the theater knowing that hordes of would-be critics had proclaimed that this was the worst of the 9 movies. Scott Mendelson in Forbes proclaimed this on December 18th, 2019. Five Days later on December 23rd fans had given it a 93% favorable rating. Fans -1 Critics-0. Let us face it though if you listen to the modern crop of critics you really are wasting your time. They, for the most part, are egomaniacal, bilious and bitter people who relish and embrace negativity without having a cinematic education or a discipline to properly assess the movies they write about. Cynicism is a drug and these mavens of pop culture are tortured, addicts.

The Christmas release, Cats was summarily buried by an avalanche of criticism. I have not seen the movie so I will reserve judgment, but what I witnessed in the treatment of this movie was a social media schoolyard pile on. I found it hard to imagine that a movie made with this depth of talent could be this uniformly bad. What I do believe though is the studio presented the movie like a cartoon, a piece of buffoonery. I suspect when the dust settles that people would start to say, this was a play based on the works of T.S. Elliott yet the studio tried to make it the bastard child of Hanna Barbera and Jersey Boys. I think the movie stumbled because of not setting expectations correctly.

While the Christmas box office was a bit of a roller coaster, the spark that was ignited by the latest installment of Star Wars managed to push it into the win column. Next year, with no more Avengers and no more Stars Wars, looks a bit dim.

What really was refreshing and exciting at the same time is that The Rise of Skywalker got people talking about going to the movies. Conversations were initiated on the opinion and experience of the movie. People compared character development, talked about the evocative ending, when did they see the first Star Wars movie and that in many ways this was the closing of the door of a grand fable that was woven through their lives. Lately, the thuggery exhibited by some critics and the repudiation of these ill-placed opinions by the population as a whole shone a light on a major issue facing movie going. It shed a light that on a simple fact that the greatest tool a movie can have is the word of mouth advertising. The will of the people can transcend sloppy and poorly conceived criticism. If the studios exhibited more trust in the judgment of the audience then maybe movie going could be re-ignited in the hearts of the general population. I think audiences are tired of being force-fed studio perceptions. I think their advertising at most times is hamfisted. This has to change, the studio must regain respect for the audience.

Look at the case of the failed sci-fi epic “John Carter”, some marketing head at Disney decided that the title of the book “John Carter of Mars” would confuse people and that the original title which gave a clear direction as to the nature of the story should be presented on the big screen as “John Carter”. Science Fiction while having a strong female representation in its fan base does have a tendency to skew male. Disney decided that full out marketing campaign would solely feature half-dressed bare-chested, abs-sporting John Carter, played by Taylor Kitsch, should be the focus of its ad campaigns. Forget about the cool aliens, the compelling back story and to heck with the attractive female lead. Do not tell the audience what the movie is about….by removing the term, Mars. The studio basically yelled “stay away” from its core audience and doomed the movie to become the poster boy for horrible studio marketing campaigns. If handled properly by engaging the core, sci-fi fans as your evangelists, this could have been a real tent pole for Disney given that there were 11 John Carter books written. Instead, Disney impaled the movie on the punji sticks of really inept marketing.

Movies are important to people. They can encapsulate a time or an emotion. They are a vehicle for memory and for adulation and are at their best a celebration of what is good in this world. Movies bring us together and become part of our collective experience as a culture and people. They are ambassadors and translators explaining our culture to others.

I once did business with a small print shop. The shop was run by a group of Afghani refugees who were escaping the carnage that had arisen in their homeland. They were polite and hardworking people, people who were respectful and liked to laugh. The shop manager was a very bright and very sensitive man who had a young growing family. He seemed to be curious about what I did. He slowly began to initiate longer conversations with me.

This man turned out to be a former fighter with the Mujahideen, the Afghani freedom fighters. He fought against the Russian invaders of his country. He told me he went to school in Kabul and studied poetry. He was a contradiction because on the surface he seemed to live a very traditional Muslim existence, he fasted during Ramadan and attended Friday prayer services in the basement of a local carpet merchant. One day he surprised me when no one else was in the shop, he told me that as a young student he loved going to a cinema in Kabul that was showed European art films. He particularly loved Truffaut’s movie “Jules et Jim.

Jules et Jim tells the story of an introverted Austrian author Jules (Oskar Werner) who strikes up a friendship with the dashing and exciting Frenchman Jim (Henri Serre). Both men fall for the impulsive and beautiful Catherine (Jeanne Moreau), but it’s Jules who finally wins her hand. After the war, Jim visits Jules, Catherine and their daughter in their Austrian home and discovers not only that his feelings for Catherine are unchanged, but also that they’re reciprocated. It is a tragic and whimsical movie, that hints at the coming storm that is about to break over Europe.

I was dumbfounded, here was a devout Muslim man who seemed to have a deep connection with the cinema of the French New Wave. It was paradoxical and gave a hint that the soul of this man was being contained by the regiment of cultural pressures. But in the end what it was a testament of the transcendent ability of the movies to connect with the aspirations within us all. It is the ability of these movies to speak and to gift connections to one another.

The movies that allow us to discuss the moment we thought Chewbacca had perished, or for this Muslim man to see another world that he would never be a part of dancing on screen. Movies contain hidden magic that can only be unlocked when they celebrate simple truths. This magic was first shared as stories were woven around a campfire, then shared silently in the deep humanity of Chaplin and the magic made its ways into a curious soul in a darkened theater in Kabul Afghanistan.

The twin suns of Tatooine will always shine and I will always be grateful for the journey I was taken on. My hope is that many will soon see the value of sitting in a darkened auditorium and witness the magic that is moviegoing first hand.

May The Force Be With You…Always.