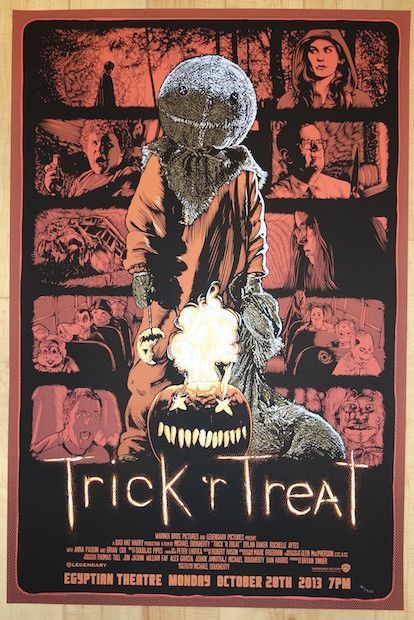 Just when it looked like the anthology movie was dead, along comes Director/Writer Michael Dougherty’s Trick ‘r Treat to not only breathe new life into this overlooked format, but also firmly establish itself as one of the best films to keep on the shelf and revisit each Halloween – if the folks at Warner Bros. ever decide to release it, either in theaters or to DVD.

Selected to close out Montreal’s 2009 Fantasia film fest, Trick ‘r Treat spins five intertwined tales featuring an assortment of classic critters and creeps, with each interlocking story carrying its own “Twilight Zone”-type twist. The single constant throughout is Sam (Quinn Lord), a mysterious diminutive munchkin dressed in a pajama jumper and sporting a burlap sack for a head with buttons for eyes, who appears briefly in each segment and takes center stage in the final story.

Borrowing a visual style from the classic EC horror comics, Dougherty deploys vintage on-screen graphic call-outs like “Later” or “Meanwhile” to let the audience know which scenes are running in order, concurrently, or previously in the film’s timeline, which comes full circle at its conclusion, ending where it began.

With exquisite art direction by Tony Wohlgemuth and lush visuals by cinematographer Glenn MacPherson (2008’s Rambo, Final Destination) the segments tell the tales of a young wife who can’t wait to ditch the trappings of Halloween, even though the film’s mythology says it’s taboo to blow out a pumpkin before midnight; a sinister school principal and single dad with a nefarious agenda planned for trick-or-treaters; a young virgin nervously seeking her first time with her pack of girlfriends; a group of kids in quest of the truth behind a local urban legend; and an aging recluse with a tortured soul who finds his quiet Halloween night rudely interrupted by Sam.

Dougherty, whose last major credit was as co-screenwriter of Superman Returns, invokes a spirit of childhood fun borne from hours spent burrowing through editions of EC Comics, Warren Publishing’s Eerie and Creepy, and DC’s House of Mystery to create a fun, rollicking ride that is rare in movies today.

The sad aspect of this is that while Trick ‘r Treat has been enjoying a positive response from the festival circuit, it’s still a guess as to when this gem will be released. While the month of October would be a no-brainer, the movie was originally targeted for a 2007 release, only to see that get pushed back again and again. It’s a shame for such a fine film to languish on the shelf, only to be seen by a select few at sympathetic festivals, for Trick ‘r Treat is virtually an instant classic of the genre, even if its only audience exposure ends up being via direct-to-DVD.