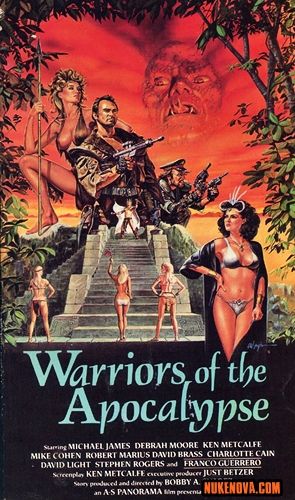 What is it with me and these cheapo 80’s movies that all revolve around the apocalypse? I seem to pick up another one every time I venture out to the market these days. Was Mad Max really that inspirational? Or is it a case of lazy screenwriters not being able to impose their vision on any other scenario than the end of the world? In any case, I’m glad that 20 years on.. the genre is more or less absent from today’s culture, so let’s try to keep it that way, shall we? A remake of this or similarly themed films is something I definitely could not handle..

In this telling of the age-old tale, we have a bunch of survivors slowly trudging through the wasteland, barely scraping by on food and water. They each have their own specific label (A smart old guy, a cool dude with shades and a leader covered in body hair to show how manly he is) but mostly they are your usual stereotypical rabble of rednecks. They run into a bit of trouble when they are constantly under attack by a tribe of pygmies who seem to have the ability to rejuvenate whenever they are killed. After being captured by these little men, they find themselves as prisoners of a 175 year old princess and her duplicitous head priest. Fortunately, their jail is a treehouse village paradise populated by gorgeous amazon-like women who see them as future fathers of their children. Not surprisingly, they want to stay now. But is there a darker side to this utopia? What do you think?

I’m still suppressing the giggles from watching this video. Gun battles where people throw themselves in front of bullets, slow-motion fight scenes where people very obviously never make any contact, the hideous, repeatedly used special effect where light beams come out of someone’s eyes (has to be seen to be believed), the customary fat girl used as comic relief because she can’t get any action, the wobbling set that looks like it was assembled from old pantomime props.. I could go on. At least it is never a chore to sit through, there is always something unintentionally hilarious round the corner just when things seem to be getting dull. This doesn’t mean it gets a good rating, but at least it would be a great choice for a MST3K night when you’ve had a few with your mates. I recommend it on that level alone.