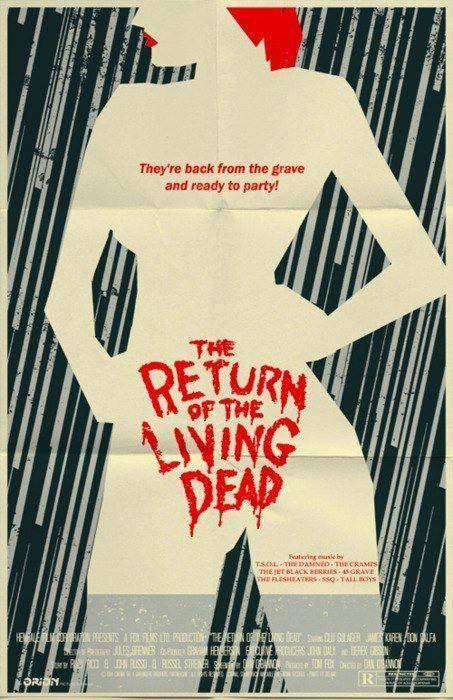 This is one of those very rare films that combines good black humor with bloody, messy gore and does it perfectly. Where `Children Shouldn’t Play With Dead Things’ fails miserably, `Return of the Living Dead’ succeeds triumphantly. It takes a tired plot (zombies eat teenagers) and makes it new again. The teenagers here are not faceless, stupid, oversexed victims at all. They are misfits and outsiders, the kind of kids who probably go to horror movies every day and make fun of the faceless, stupid, oversexed victims who populated the majority of the slasher films made in the 1980s. The nihilistic punk rock teens can identify with the zombies, and even though it is their ultimate fate to be consumed by them, you like them, you want them to survive and you’re sorry to see them go even though the zombies are every bit as cool.

Long before `28 Days Later’ appeared, `Return of the Living Dead’ presented us with FAST zombies, zombies who could run, jump and work together like a football team, tackling people and making it a group effort to tear their victims apart. There are very few slow, shuffling monsters here; these are zombies to contend with. They talk, they think, they problem solve. Who could ever forget the Tar Man (my personal favorite) rigging up a device to tear down the metal closet doors, behind which our heroine has locked herself?

The adult characters in this film are no less interesting than the teenagers. James Karen is absolutely hysterical in his role as a medical warehouse manager, whose bumbling irresponsibility leads to the zombies being unleashed. Clu Gulager is a stressed out corporate jerk who will do anything to save the name and reputation of the warehouse he owns. And Don Calfa is excellent as the slightly shady mortician who may or may not be an ex-Nazi. The mismatched cast really comes together and forms a bond here, fighting back and growing more desperate as the zombies grow stronger. This film never lets up, not for one minute. There are no long explanation scenes, no boring set-up, just in-your-face excitement from the very first scene. It is the perfect homage to the Romero films; there is no happy ending here, only an ironic twist which will make even the most cynical doomsayer grin. This film is already a cult classic and deserves its status. It’s as close to flawless as you can get.