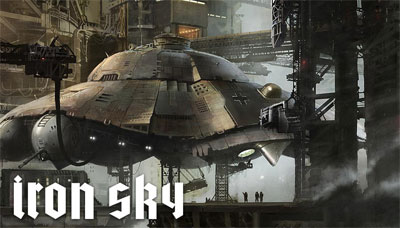 Iron Sky’s audacious ‘Nazis on the moon’ concept and fan-funded nature has secured plenty of advanced publicity for the project, but apart from a few barkingly brilliant moments there is little to enjoy in this poorly executed and tonally inconsistent movie.

While the impressive-looking production values belie its humble origins, an amateurish script full of stale scenarios and flat dialog ensures that any enthusiasm for the story or characters dissipates quickly. But still – what a premise!

Set in the year 2018, the American President – a tediously veiled Sarah Palin spoof – launches a mission to put black astronaut James Washington (Christopher Kirby) on the moon in order to secure re-election through a blaze of positive publicity. Yet he stumbles across a Nazi fortress on the dark side of the moon, the results of a secret Third Reich space program implemented during the last moments of World War II.

Washington is captured and bleached white after his skin color shocks the Nazis, making him look like a Wayans brother in White Chicks. He soon attracts the amorous attention of teacher Renate (Julia Dietze) and the pair become embroiled in a Nazi invasion of the Earth spearheaded by her genetically matched partner Klaus (Götz Otto). Macabre mayhem ensues, but with surprisingly few laughs despite the sheer absurdity.

The strongest story strand involves the freshly albino’d astronaut’s return to Earth and struggle with his new identity, leading to a few amusing ‘fish out of water’ moments. He’s also responsible for most of the movie’s best (and quoteworthy) lines, such as lambasting the Nazis for him being “the moon spook you turned into a snowflake!”

It feels as if their performances are trying to rise above the subject matter in the levels of ludicrousness, overselling the scenarios in a hugely grating and stylised manner when understatement was required to bring out the humor. Besides, Sarah Palin is already a walking caricature and an exaggerated version doesn’t work within the context of the movie. Frequent digs at US foreign policy also fall flat due to their heavy-handed nature, which is symptomatic of the writers’ lack of invention.

The premise is rife for an abundance of crude and hilarious scenarios with old-school Nazis landing on Earth, a riff on Tim Burton’s genial Mars Attacks!. Stale ideas, hammy melodramatics and poor editing prove to be an insurmountable obstacle despite the occasional flourish. The frustration that emanates from Iron Sky is that such an audaciously plotted movie could have been pulled off with a vibrant, innovative script.