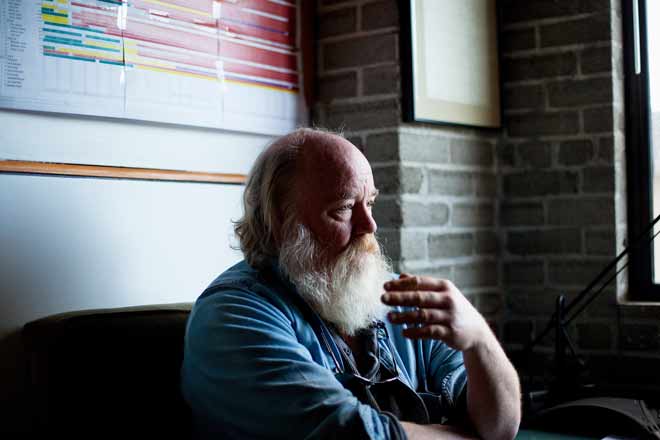 In a warehouse space in a picturesque neighborhood here, Phil Tippett, the Oscar-winning visual effects genius who has worked on everything from Star Wars to the wolf pack in the Twilight films, is toiling away on a passion project that he may never see completed.

It’s a short, experimental film called Mad God and, by his own estimation, Tippett’s been working on it “for like 20 years.” Set pieces for the stop-motion animation project — described on its Kickstarter page as a “hand-made, animated film set in a Miltonesque world of monsters, mad scientists and war pigs” — fill huge areas of his namesake studio.

The bearded giant at the helm says he’s got a narrative in his head, but it’s pretty hard for even Tippett to fully explain Mad God. And since he works on the constantly evolving story between other projects, he’s put in place a backup plan for what to do if Mad God outlives him.

“I’ve collected a little group of people — guys around here that really missed the era when you actually made things,” the VFX pioneer told Wired in a light, airy room at Tippett Studio. “We’ve shot an end title for it. So the idea is that if I have a heart attack when we leave here, they put the end credit on and that’s when it’s done.”

That’s Phil Tippett, a consummate creator who, after more than three decades in the business, doesn’t feel the need to mince words because his resume speaks for itself. His first big Hollywood movie was Star Wars: Episode IV — A New Hope (he even put in an uncredited performance as a cantina alien), and he went on to win Oscars for his work on Return of the Jedi and Jurassic Park. And yet, in an era when CGI has cheapened cinema and foreign countries compete to lure Hollywood’s business, his namesake studio still struggles.

Tippett isn’t the only one feeling the squeeze. In recent years, more and more film productions are outsourcing their VFX to places like London and Vancouver. Getting the effects work done in those cities costs the same amount that Tippett’s work would command, but the producers get tax incentives better than those available in for U.S. productions. The resulting shakeout shows no signs of slowing.

From Stop-Motion to CGI
But Tippett is used to making something out of nothing. Born in Berkeley in 1951, he knew early on that he was into monsters. (“I was in the dinosaur camp,” he said.) He was entranced by films, particularly the work of legendary effects creator Ray Harryhausen.

“In 1955, I think it was, they started running [King Kong] on television; I was 5 years old and saw it…. I couldn’t believe my eyes,” Tippett said. “Ray Harryhausen was the guy when I was a kid. I made my parents take me to see The 7th Voyage of Sinbad in 1958 over at the theater on Solano.”

“Ray Harryhausen was the guy when I was a kid. I made my parents take me to see The 7th Voyage of Sinbad in 1958.”
After years of teaching himself drawing and sculpting, Tippett went to the University of California at Irvine to get a fine art degree. After school, he landed at Cascade Pictures in Los Angeles doing animation work. “It was like the 10 geeks that were interested in that kind of stuff were there,” he said. Some of those geeks were up-and-coming special effects whizzes like Dennis Muren, Jon Berg and Ken Ralston.

Those friends would eventually help Tippett work with a hot young director named George Lucas, who was working on a new space-adventure movie and wasn’t happy with the creatures in his movie’s cantina scene. Muren told Lucas about an effects guy named Rick Baker, who he thought could help.

“So Rick threw together a shot with about five or six unemployed stop-motion animators at that time,” said Tippett, who was one of the half-dozen tasked with creating the eccentric extraterrestrials in the Mos Eisley cantina. “We just worked over a lot of masks Rick had done…. We had like six weeks and we just had to bang this stuff out.”

They ended up bringing to life one of sci-fi cinema’s most enduring images: a dingy Tatooine dive bar filled with some of the galaxy’s seediest characters, the perfect place to catch some deep-space jazz or blast a bounty hunter. When Lucas needed help with the holographic chess sequence elsewhere in A New Hope, he brought on Tippett and some others to bring the novel game to life on the screen. They put together the scene in about a week.

Star Wars went on to become a massive hit and, as Lucas began growing his Industrial Light & Magic operations, two of his effects gurus — Dennis Muren and Joe Johnston — convinced the director to add a stop-motion department. Tippett moved back to the San Francisco Bay Area and eventually began working on The Empire Strikes Back, doing stop-motion animation on the famous AT-ATs, which — despite what urban legend may say — were not inspired by the dock machinery at the Port of Oakland.

Tippett formed his studio the same way Steve Jobs formed Apple: in a garage. In 1984, after completion of the original Star Wars trilogy (and after winning a special-achievement Oscar for Return of the Jedi), Tippett Studio was founded as a stop-motion animation company with just two people: Phil Tippett and his partner, Jules Roman. The studio made a name for itself doing effects for RoboCop and Honey, I Shrunk the Kids. But it made visual effects history with Jurassic Park.

Originally, Steven Spielberg’s life finds a way dinosaur amusement park movie was going to be done with stop-motion miniatures from Tippett combined in post-production with larger robotic dinosaurs created by special effects master Stan Winston. But then Muren told Spielberg about the new CGI technologies that were being used by ILM for Terminator and said he might be able to make dinosaurs. Spielberg and Tippett watched a mock-up of CGI dinos and were blown away. In that moment Tippett told Spielberg, “I think I’m extinct.” (Spielberg later worked the line into the Jurassic Park script.)

“It was like this big emotional thing for me because I was like, ‘Oh god, that’s it. What I do is not relevant anymore,’” Tippett said, recalling the film’s production.

Chris Morley does digital effects for Tippett Studio.
Spielberg decided to use CGI for the film (along with Winston’s larger animatronic dinos). But Tippett wasn’t out. After cutting their teeth on stop-motion work, Tippett’s animators were better equipped than computer nerds at making dino-motion look real. So they came up with a solution to combine the efforts — the Dinosaur Input Device, an animator’s puppet covered in sensors that translated movements into computer code (one of the devices sits in Tippett’s Berkeley office, not far from the visual effects Academy Award that Tippett subsequently won for Jurassic Park).

Adding CGI to the mix might have been an overhaul of Tippett’s work style, but it was by and large just a new way of doing the thing that had made the filmmaker unique in his field.

“The secret to what Phil does is a cross-platform ability in that he has a way of adding character traits to inanimate objects,” Okun said. “What Phil’s done that makes him unique and special is that — besides advancing the art of stop-frame animation — he manages to put character into motion into these little puppets that he manipulates, and he does so with a fanboy glee.”

Following the success of Jurassic Park, Tippett Studio was hired to work on Starship Troopers in 1995, and the studio grew from a crew of 25 to a staff of 200 digital animators, lighters, engineers, compositors and other production staff. The studio has been chugging along ever since.