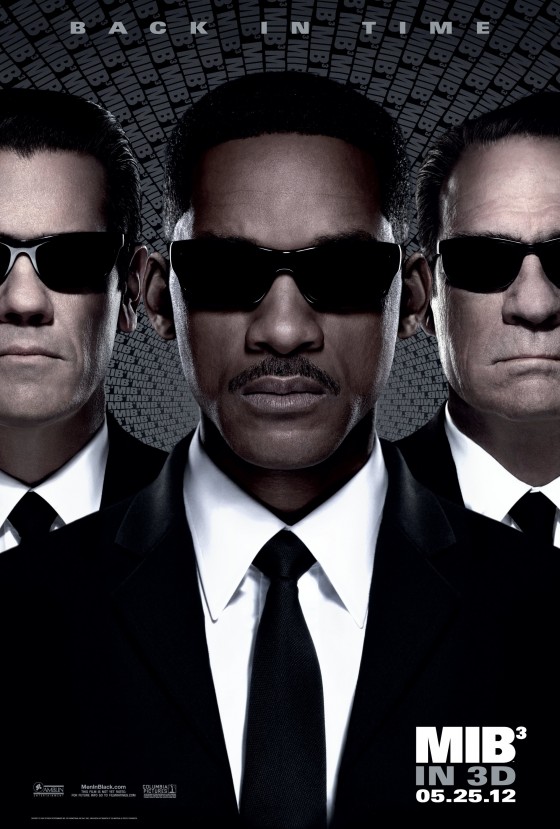 Over the past couple of decades, this four-day holiday weekend has been one of the busiest moviegoing weekends of the year and after three weeks at #1 and having grossed over $450 million, it seems like a good time for Marvel’s The Avengers to take a backseat to another movie.

Along comes Will Smith in his first movie in over three years to revive a franchise that helped make him a box office superstar in the ’90s, reuniting with Tommy Lee Jones and director Barry Sonnenfeld for Men in Black 3 (Sony). It’s been ten years since the last installment and joining Smith as a younger version of Tommy Lee Jones’ K is Josh Brolin, as well as Emma Thompson, Alice Eve and Michael Stuhlbarg. It promises to have a lot of the same humor plus lots of cool aliens and gadgets, and the PG-13 rating means parents will be able to see it with their kids over 10.

Some may feel that Men in Black 3 doesn’t stand a chance against The Avengers steamroller, but the good thing about this movie (and one of the reasons why so many studios bank on sequels) is that people know what this movie is and the casual moviegoers who flock to theaters over Memorial Day weekend (including all the sailors back for Fleet Week). The problem is that it’s been ten years since the last movie and it’s not like anyone’s been clamoring for another “Men in Black” movie after the somewhat disappointing 2002 sequel. One also has to wonder whether the impressionable teenagers who tend to drive the box office will have any interest in the movie since they would have been too young to see the previous movies or the Saturday morning cartoon.

Both previous “Men in Black” movies made roughly $51 to 52 million in their first weekends although both of them opened a couple of days earlier because they were 4th of July releases. If you take into consideration ten years of ticket price inflation as well as the higher price for 3D tickets plus the fact the movie is opening on a Friday, one can easily see the latest movie doing at least that amount even with fewer moviegoers, mainly since this is one of the busiest moviegoing weekends of the year. With that in mind, we think Men in Black 3 will end up making between $55 and 58 million over the three-day weekend with a nice bump on Monday to bring it over the $70 million mark.

Offered as odd counter-programming is Chernobyl Diaries (Warner Bros.), a found footage horror movie produced by “Paranormal Activity” mastermind Oren Peli, that takes the scares across the seas as it follows a group of kids as they explore the site of Russia’s biggest nuclear disaster. While Peli’s “Paranormal Activity” franchise with Paramount continues to do well, other horror movies that try to use that format aren’t nearly as successful as epitomized by last year’s Apollo 18, which grossed $18 million total. As is the case with most of these movies, none of the cast is known, which means this one is being sold entirely on Oren Peli’s name, but honestly, this doesn’t seem like the kind of movie audiences normally would see over Memorial Day so it feels more like it’s being dumped. Even so, since older teens might not be as interested in Men in Black 3, it should bring in a little bit of business but opening in only 2,500 theaters, it will probably top out the weekend with less than $13 million for the four days.

Even though The Avengers will be giving up the top spot, we think it should hold up well as the rest of the moviegoers that hadn’t gotten around to see it will see it this weekend since Memorial Day has always been a good weekend to catch-up on movies you’ve missed. With that in mind, unlikely choices like Dark Shadows and What to Expect When You’re Expecting may pick up in business slightly, and also, we fully expect Fox Searchlight to go even wider with The Best Exotic Marigold Hotel and continue its run in the Top 10.

Last Memorial Day weekend, it was the battle of the sequels as the R-rated comedy The Hangover Part II (Warner Bros.) took on the PG animated comedy Kung Fu Panda 2 (DreamWorks Animation/Paramount) with both of them opening a day early on Thursday. It was pretty definite who was going to win the weekend when “The Hangover” brought in $32 million its opening day to the sub-$6 million opening for “Panda.” The division between the two was minimized over the weekend but “The Hangover” still won with $103.4 million over the four-day weekend with “Panda” taking second place with $60.9 million. Pirates of the Caribbean: On Stranger Tides had a fairly substantial 45% drop to take third with $50 million. The Top 10 grossed $265 million but since this year’s two new movies won’t gross $160 million (and probably will end up with roughly $90 million between them), we think the top 10 will end up with roughly $180 to 185 million this weekend.