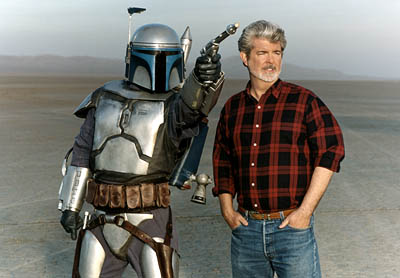 Lucas was the story writer of all the main Star Wars films. He also served as the director of all films except for The Empire
strikes Back and Return of the Jedi.

For those who haven’t seen the original version of the film, the plot (without spoilers) goes: after failed negotiations between the Republic and the Trade Federation, Jedi Knight Qui-Gon Jinn, played by Liam Neeson and Padawan learner Obi-Wan Kenobi, played by Ewan McGregor, sense a disturbance in the Force. With the appearance of a Sith Lord and hostile sentiments between the people of Naboo and the Trade Federation, battle seems imminent.

While The Phantom Menace is not as highly regarded as the films from the original trilogy, evidenced by its 6.4/10 rating on imdb.com, the film has improved with the subtle 3D additions, a sign of things to come for the rest of the series. It is only a matter of time before A New Hope is released in 3D. For The Phantom Menace, the green screen characters: Jar-Jar Binks, Sebulba and Yoda, all benefit from the added realism of RealD 3D. Even starfighters and podracers appear within an arm’s reach. Now, the viewer almost feels as though they are fighting alongside Qui-Gon and Obi-Wan in the epic final battle.

“My favorite hero is Qui-Gon Jinn. He was this awesome Jedi master; he was the voice of wisdom; he had an awesome beard,” junior Anthony S. said.

Other fan favorites include the young Anakin Skywalker, Padmé Amidala, and R2-D2.

In a hypothetical matchup of Yoda versus Darth Maul, junior Kenneth V. said that his bet would be on the green, wrinkly, 900-year-old Jedi Master.

“Even a young Obi-Wan Padawan can take out Darth Maul. In a fair match, Yoda would win. If Darth Maul got the surprise on Yoda, he would take him out,” Kenneth said.