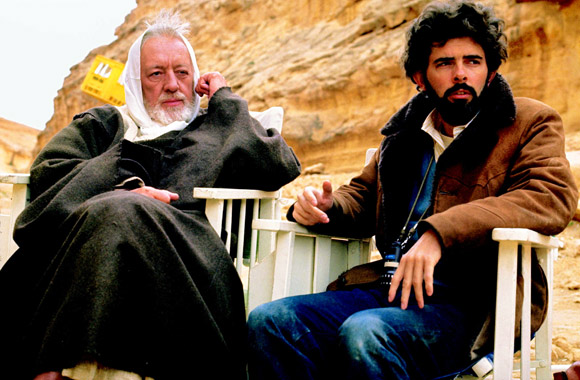 Arthur Powers is 19 with a face to match, a flattop he cut himself and jeans he hemmed with scissors. He wears his grandfather’s large wedding band with tape wrapped around the back. He has no money or car. He has a young wife at home.

He rides a bike to a place called Emerald City where he sells comic books and toys and makes minimum wage. He has to force himself to shut up when customers say Greedo the bounty hunter shot Han Solo first, or they don’t understand the Sith, or they think the Star Wars cartoons are better than the movies. He knows he can be arrogant and bullheaded, and he is trying to be mature.

Arthur got his first Star Wars toys at 3. Six Christmases later, he tore open a Jango Fett doll and cried when the head fell off.

His father brought home Star Wars: Episode I — The Phantom Menace after an Army tour in South Korea. Arthur watched it so many times the tape broke. He worked his way back to the original Star Wars, which came out 35 years ago today, 16 years before Arthur was born.

He amassed a mountain of spaceships, novels and comics, plus 300 toys stored in a tackle box. He made a girlfriend watch all the movies. She’s an ex now.

He met his future wife freshman year at Seminole High. He started dating her two years later. Two weeks after that, he went to a Star Wars convention in Orlando and met an Ewok from Return of the Jedi. He was awestruck by the men in $10,000 Boba Fett armor, the women in Princess Leia garb, the artists, the creators, the collectors.

He stood in line to buy posters but put them back. He wanted a $1,000 lightsaber, but he couldn’t even afford the $90 DVDs. He kept the lightsaber guy’s card.

Arthur lived with his best friend after high school. They stayed up late dissecting the potential of other galaxies and new planets, arguing military tactics of undiscovered species, whether the alien race would look more like insects or human beings. Arthur thought insects. Insects work together. Humans just kill each other.

He got married six months ago. He got an apartment with his wife two miles from Emerald City. He gave most of his comics to his best friend and sold the model spaceships that hung on the walls, because they wouldn’t look right in a married man’s home.

He considered the tackle box with 300 toys, with the rubber Yoda doll he got when he was 3. Yoda was missing an arm.

He put the tackle box in his kitchen pantry, stowing away the queens and droids and Wookiees and cowboys who made him believe he could have his own adventures on ships, even here on this planet.