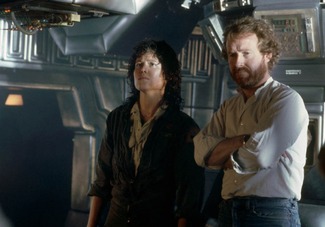 The success of “Star Wars” changed everything. While “2001” had been a giant hit a decade ago, most put it down to a fluke, but George Lucas’ film suddenly proved that science fiction wasn’t just for B-movies, but could be a licence to print money. Every studio in town were chasing the genre, but 20th Century Fox, who had distributed “Star Wars” had a head-start: they already had another space-set script in development, “Alien,” by Dan O’Bannon, Ronald Shusett, Walter Hill and David Giler. They swiftly attached new helmer Ridley Scott to the project, and production got underway in the summer of 1978.

The result, released exactly two years after “Star Wars,” on May 25th, 1979 (thirty-three years ago to the day) was an enduring classic, which serves as a high watermark of the both the sci-fi and horror genres, and it launched Scott’s career. And next week, the director will return to where it all started: the first screenings of “Prometheus,” his semi prequel to the original, will take place, with the film hitting theaters around the world on June 1st, before following in the U.S. on June 8th. To mark the anniversary, and the imminent arrival of “Prometheus,” we’ve gathered up five things you might not know about Scott’s sci-fi classic. Check them out below.

1. The film came into being thanks to a beach ball.
Screenwriter Dan O’Bannon (who passed away in December 2009) had started out in special effects, co-writing John Carpenter’s existential sci-fi comedy debut “Dark Star.” In that film, the alien creature (a mascot adopted by the ship’s crew, rather than an antagonist) was a spray-painted beach ball, but O’Bannon wanted to come up with something revolving around a realistic, terrifying extraterrestrial creature. Not long after, he was contacted by writer Ronald Shusett, who wanted to work together on an adaptation of Philip K Dick’s “We Can Remember It For You Wholesale” (which would eventually become “Total Recall”), but the pair agreed to work on O’Bannon’s idea first, starting off from an uncompleted script called “Memory,” which began with astronauts awakening from a long journey. After a small delay when O’Bannon was hired for the effects on Alejandro Jodorowsky’s aborted version of “Dune,” the two bashed out a script, initially called “Star Beast,” but soon retitled “Alien.” It was minimalist stuff — they deliberately wrote generic, interchangeable human characters, focusing more of their time on the creature — but it proved effective. The duo were on the verge of selling the film to Roger Corman’s company when Walter Hill’s shingle Brandywine, who had a deal at 20th Century Fox, expressed an interest. Hill, and partner David Giler, would do substantial rewrites on the film, but it was only after “Star Wars” proved to be a mammoth success that the film got the greenlight from the studio: despite Fox having releasing Lucas’ film, “Alien” was the only science-fiction script that the company had in the works.

2. Robert Aldrich, Peter Yates and Jack Clayton were all in the running to direct before Ridley Scott.
Initially, the studio wanted the film in the hands of a reliable veteran, and people like Peter Yates (“Bullitt,” “The Deep,” “The Friends Of Eddie Coyle”), Jack Clayton (“Room at the Top,” “The Innocents”) and Robert Aldrich (“Kiss Me Deadly,” “Whatever Happened To Baby Jane,” “The Dirty Dozen”) were all considered. Aldrich in particular nearly got the gig, but when Hill and Giler met with him, it was clear that the veteran helmer was treating it as a job-for-hire: when they asked him what he thought the facehugger should look like, Aldrich responded “We’ll put some entrails on the guy’s face. It’s not as if anyone’s going to remember that critter once they’ve left the theater.” Hill considered directing the film himself, but ended up making “The Warriors” around the same time, while O’Bannon pushed heavily for the job himself. But in the end, the studios and producers were impressed by “The Duellists,” the debut of a young British commercials director named Ridley Scott. Scott was trying to make another historical epic, “Tristan & Isolde,” at Paramount, but couldn’t get a greenlight, and jumped at the chance when it came along. From the first meeting, it was clear that Scott was the man they needed — he had no intention of treating it as a knock-off B-movie, as Aldrich had been. Indeed Fox executives were so impressed by Scott’s presentation of storyboards and designs that they doubled the budget of the film, from $4 million to over $8 million.

3. Sigourney Weaver beat out Meryl Streep to the role of Ripley, while Jon Finch was originally cast as chestburster victim Kane.
With the script pretty vague on who the targets of the alien would be, Scott had more or less free rein on casting, and decided on a blue-collar, “truckers in space” vibe, to ground it in a real world, and differentiate the film from other horror flicks with a collection of stalwart British and American character actors. Tom Skerritt was one of the first approached, but only came on board when Scott was actually hired to direct, while Harry Dean Stanton had to be convinced that the film was more thriller than sci-fi before he agreed to play Brett. Meanwhile, the director wanted John Hurt to play Kane, the unknowing and unfortunate incubator of the creature, but the actor was already committed to a film that was set to shoot in South Africa around the same time. Jon Finch (Polanski’s “Macbeth,” Hitchcock’s “Frenzy”) was cast in his place, but on the first day of filming, Finch was taken ill — later diagnosed with diabetes and bronchitis. Fortunately, Hurt had been denied access to South Africa, mistaken for staunch anti-apartheid activist John Heard (the film subsequently fell apart), and was now available again. Of course, the key role turned out to be Ripley, and Scott was keen to go for a relative unknown. Veronica Cartwright (“Invasion of the Body Snatchers”) was under the impression when she flew to London that she’d nabbed the part, but in fact she’d been cast as navigator Lambert. Instead, Scott was still trying to pick between Sigourney Weaver and Meryl Streep, who was about to break out in “The Deer Hunter.” In the end, Scott went with Weaver, and obviously, Ms. Streep was never heard from again…

4. The titular creature was played by a seven-foot-tall Nigerian graphic design student.
Of course, the biggest question was always how to create an alien beast that would set the film apart from the competition. Dan O’Bannon had met Swiss designer H.R. Giger while working on Jodorowsky’s “Dune,” and recommended him to Scott, along with “Heavy Metal” artist Mobius (who would have a hand in the design of the spacesuits). Giger’s otherworldly, sexual designs freaked out executives at Fox, but Scott fought hard for them, and they obviously became a part of cinema history. When it came to building the creatures themselves, Giger wasn’t afraid to use everything but the kitchen sink: the facehugger’s probing tail was made from a sheep’s intestine, and when dissected, was mostly full of shellfish (as for the chestburster scene, it was filmed in one take, and the cast were only told vaguely what would be happening: Veronica Cartwright’s reaction on being splattered with blood is entirely real). Meanwhile, his build of the Alien suit itself included snake vertebrae, a human skull, and the cooling tubes from a Rolls Royce. In a pre-CGI era, it would have to be played by a man in a suit, and fortunately, a member of his casting team came across Bolaji Badego, a Nigerian graphic design student, in a bar in London. Badego was 7 foot 2 inches tall, and incredibly slender, which made him perfect for the part. He was packed off to t’ai chi and mime classes to get the right kind of movement for the role and, clearly, nailed it. However, he wasn’t the only one to wear the suit; for some of the trickier shots, stuntmen Eddie Powell and Roy Scammell also donned modified suits. And if Scott had had his way, the alien would have come up triumphant at the end, and likely shortened the franchise: the director originally wanted the film to end with the xenomorph biting off Ripley’s head and then speaking in her voice. Thankfully, cooler um, heads, prevailed.

5. When the crew discover the space jockey? It’s actually Ridley Scott’s kids in the space suits.
The film had undeniably impressive production design (courtesy of designs by Giger, and art director Roger Christian, who would go on direct legendary disaster “Battlefield Earth”). But Scott had to fight hard for it: Fox wanted to cut the discovery of what the crew nicknamed “the space jockey,” claiming it was an extravagant expense for a single scene. Scott eventually won the battle, and was keen to make the most of it: to emphasize the scale of the set, Scott put his pre-teen kids, Jake and Luke (who both grew up to be directors), as well as the child of one of the cameramen in smaller version of the space suits, also using the same technique for the exteriors of the Nostromo (the suits themselves were the bane of the production: they were lined with nylon, and had no venting or cooling system. The film shot during a heatwave, so the actors regularly passed out, and an oxygen tank had to be kept on hand). Still, given that the scene was the jumping off point for the imminent prequel “Prometheus,” most will agree that it was worth it, although some found the creature too terrifying — when the film was released, props and costumes were displayed outside the Egyptian Theater in Hollywood, and religious types set fire to the space jockey, believing it to be the work of the devil.