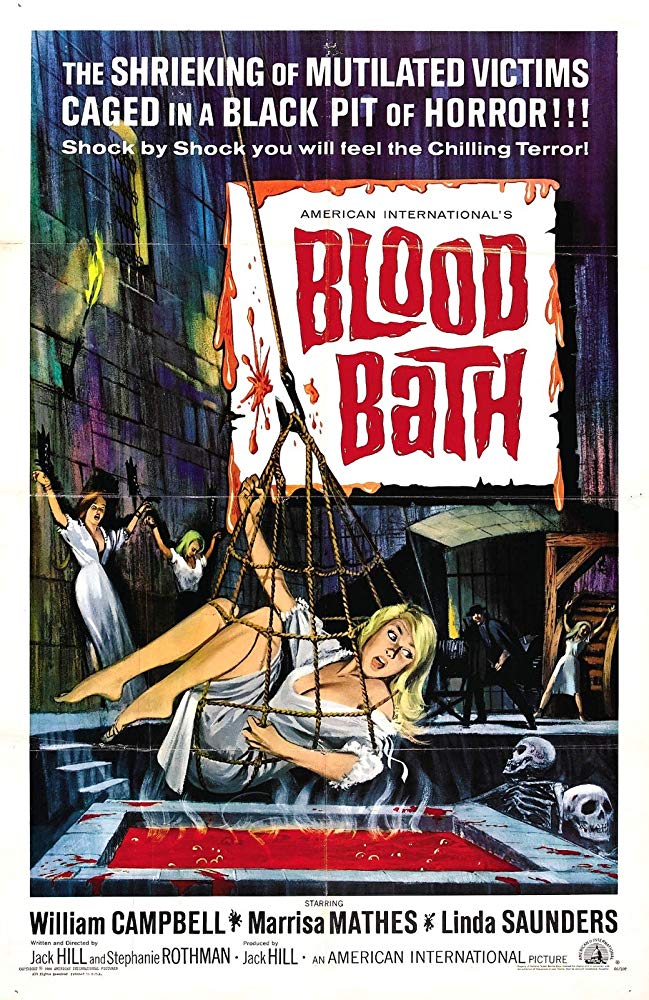 Roger Corman bought an unfinished film shot in Europe called OPERATION TITIAN concerning the hunt by both cops and crooks for a stolen Titian painting. Patrick Magee was the star. At the same time Jack Hill was shooting a movie in Venice, CA about an artist (biker film alumnus William Campbell) who kills his models and dips them in boiling wax (where have we heard THAT before?). By combining the footage, a trick he was to do many times in the 60’s Corman created a film that essentially made no sense at all. Now that has never stopped our Roger so he brought in new director Stephanie Rothman who added an effect new to American movies, an oil dissolve, and shot even more footage to create a film about an artist who sometimes transforms into his remote ancestor who was falsely accused of witchcraft and burned at the stake only to return as a vengeance seeking vampire. Got all that? The stolen Titian painting was lost in the shuffle and Patrick Magee shows up only briefly as a jealous husband who gets dumped alive into the boiling wax.

Meanwhile watch for Corman regulars Jonathan Haze, Sid Haig and Carl Schanzer turn up as Beatniks (leftover characters from BUCKET OF BLOOD perhaps?) who hang out in a coffee house, argue about art and use the word “quantum” a little too frequently. Also in the cast is Lori Saunders (billed here as “Linda”) who went on the play the airhead, would-be journalist Bobbie Jo Bradley on “Petticoat Junction”. This time she plays a dancer who is in love with Campbell never suspecting what he does with his models. She has a lengthy (8 minutes by my stopwatch!) scene where she does an interpretive dance on the beach and models 3 bikinis, each one smaller than the one before it, during the film.