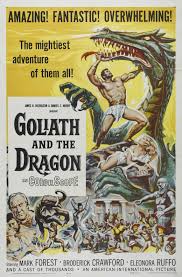 Broderick Crawford plays his role of a corrupt would-be emperor like he were still playing a 20th century gangster. Watch him bark orders to soldiers like he were plotting a gangland rubout. Meanwhile Mark Forest is the hero called “Emilius” who is nicknamed Goliath because he is so strong and (apparently) immortal. He also has a younger brother is is neither superstrong nor immortal and a mortal wife who is not bothered by the fact that she will eventually grow old and die but he won’t. Go figure. Most of us watch these movies for the monsters and oft-times the cheesier the better. After a mechanical 3 headed fire breathing dog (ahem, that is NOT Cerberus!), a man in suit giant bat and a centaur (which had to have been the most uncomfortable costume in the bunch) seeing a dragon that is partially stop motion animated was a real treat. Oh yeah, in closeups it is a giant rubber prop but those few moments of animation make it worthwhile. There is enough plot here for 2 movies and it does not always make perfect sense but the action will keep your attention. Oh and look closely at that dragon. David Hewitt borrowed some of the stop-motion scenes for his no budget thriller THE MIGHTY GORGA.