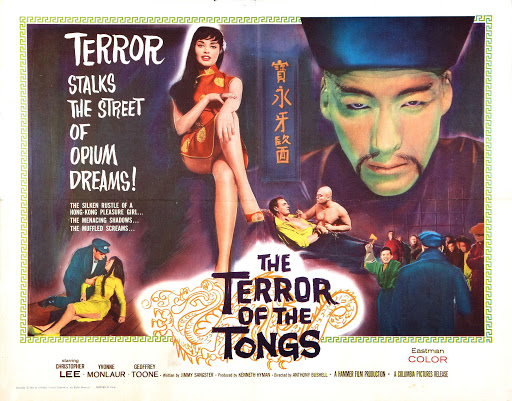 Sir Christopher Lee warms up for his later Fu Manchu characterizations by playing an Asian villain here. He’s Chung King, the leader of the deadly criminal organization The Red Dragon Tongs in early 20th century Hong Kong. The Tongs reign supreme, and seemingly can’t be touched, not by the underwhelming local police force, anyway. However, they make their biggest mistake when, in the attempt to obtain an all-important scrap of paper, they murder Helena Sale (Barbara Brown), the daughter of sea captain Jackson Sale (Geoffrey Toone). He embarks on a one-man campaign for revenge, taking on The Tongs almost by himself.

A good cast and a snappy pace make this fun. It’s far from prime Hammer, but it is entertaining to watch. Some viewers may feel that seeing so many obviously Caucasian actors and actresses play Asians will take them right out of the action, but others may not mind. It is amusing to see the determined Toone take on all comers, assisted on occasion by a “beggar” (Marne Maitland) whose people are plotting an overthrow of The Tongs. Romance is also part of the mix as the young lady Lee (lovely Yvonne Monlaur, whose French accent remains intact), who’s mixed up with The Tongs, falls for our stubborn hero.

As usual, James Bernards’ soundtrack is enjoyable, and the sets are evocatively designed. Director Anthony Bushell, himself a former actor, does a decent job; the action builds towards a brief but diverting mass confrontation between citizens and criminals. Lee is authoritative, with his deep, rich voice being perfect for an unflappable antagonist. Also very good are Maitland, Brian Worth as the district commissioner Harcourt, Roger Delgado as the primary henchman, Charles Lloyd Pack as the sinister assassin Dr. Fu Chao, and the briefly seen Burt Kwouk as the brave businessman Mr. Ming.