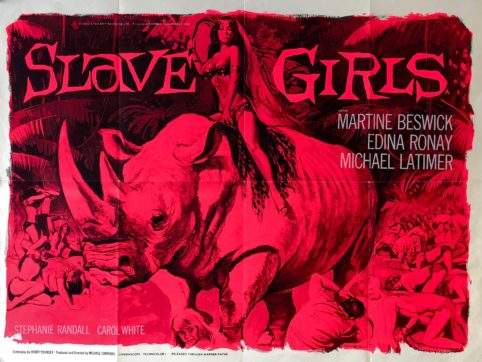 A goofy Hammer movie whose sole raison d’etre seems to be to disprove the old adage that blondes have more fun, “Prehistoric Women” (1967) certainly did have me laffing out loud. In it, great white hunter David Marchant (unconvincingly portrayed by pretty boy Michael Latimer) is captured by Aftrican tribesmen for hunting on their lands. One lightning stroke later, Marchant finds himself in a land where brunette women rule, where hotty blondes are slaves, and in which Queen Kari (Martine Beswick) rules over all in the service of the white rhinoceros god. We never exactly find out whether or not Marchant has been zapped back in time, or whether he is in present-day Africa, or is dreaming. Maybe he’s hallucinating with a bad case of dengue fever! By the end of this picture, I promise you, you’ll be too brain dead to care. The film is as campy as can be–almost on a par with “Cobra Woman” (1944)!–with loads of priceless dialogue and situations. The natives’ singing and dancing routines will surely have you howling! The only real special effect to speak of is Martine’s abdomen; her superflat tummy looks like the result of 50,000 grueling sit-ups! Actually, Beswick is remarkably sexy in her regal role, and the picture drags whenever she’s not on screen. A preposterous back story doesn’t help matters either.