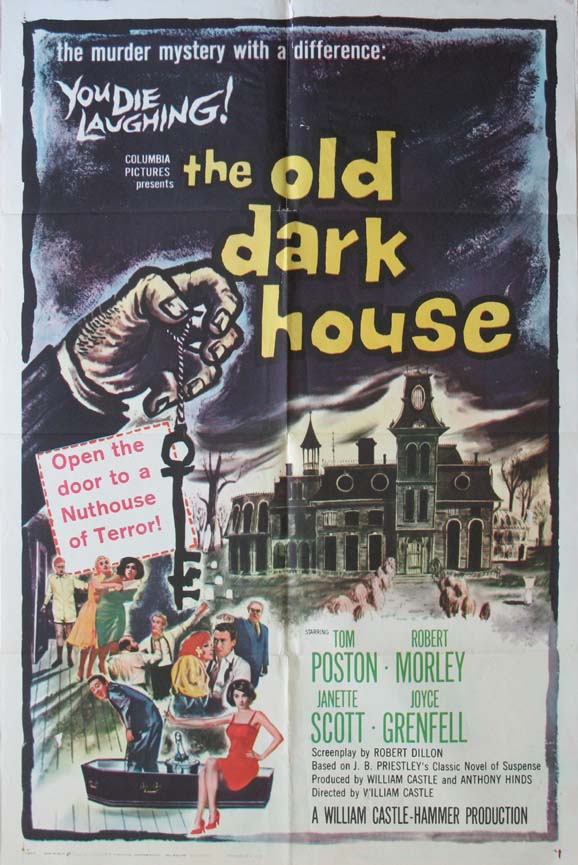 Amusing quips and snappy banter abound. There are some plot contrivances (typically par for the Castle course). The Old Dark House would surely have been better suited for black and white film stock as the milieu is inherently sinister. That being said the full color palette does tend to heighten the humor elements of the story as Poston’s pink puppy dog cheeks remind us of how sweet and naive a witless hero can be. However, the chromatic compromise confounds establishment of mood and thus character motivation. A third of the duration of the film passes prior to the formation of a real clue about the plot (which according to other reviewers holds little sway in the realm of fidelity to the original Priestly story or Whale film from the thirties). The staging/blocking and mobile framing are not constructed with any technical finesse or creative flair. I tend to find that Castle’s best directing efforts are inspired by higher quality scripts he works with. For Castle, when the storytelling stammers his direction staggers and his authorial voice goes mute. There are shades of this crutch in The Old Dark House. Similar to Zotz!, Poston plays a character that reminds one of Leonid Gaidai’s Shurik character – fumbling and bumbling through the simplest of tasks, getting himself into trouble way over his head, and gallantly dodging sexy, seductive women who throw themselves at him bosom to face. If you wanted to probe and plumb this film for some deeper value, try a psychoanalytic approach (either Freud or Lacan will do). Personally, I wouldn’t bother… but you never know. As it stands, this is an amusing film that is best watched while doing something more important.