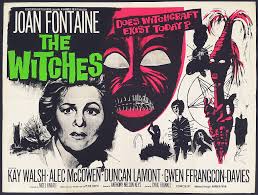 After being threatened by witchcraft in Africa, Gwen Mayfield (Joan Fontaine) has a nervous breakdown and returns to England. She is invited to teach in a private school, owned by the wealthy Alan Bax (Alec McCowen) and his sister Stephanie Bax (Kay Walsh), in the village of Heddaby. After a period in the place, she witnesses weird events with locals, and she realizes that the place is indeed a coven and her student Linda Rigg (Ingrid Brett) is being prepared for a sacrifice.

“The Witches” is a Hammer film that can be divided in two parts: the first one, with the arrival of Mayfield to Heddaby, is intriguing and suspenseful. Joan Fontaine, in her last work in the cinema, performs a fragile and vulnerable woman due to a trauma in Africa, and wondering if there are witches in the village. The second part, when she returns from the mental institution, is simply awful. The long ritual of the witches is disgusting and silly, and spoils a promising film. Kay Walsh, the former wife of David Lean, has a great performance, highly above the rest of the cast.