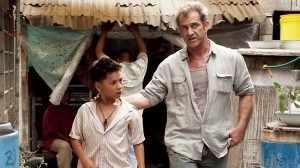 And he will do just about anything to get it.

As we all should know by now, the moment Gibbo’s private life went public, his career went kaput.

The man is either too proud or too deluded to realise the stardom he once enjoyed will not be coming back.

Nevertheless, Gibson staggers further out into a wilderness of his own making, throwing all kinds of strange shapes (remember that movie last year where he spoke through a hand puppet?) in the faint hope we still might notice him.

Unfortunately, with so many people having written off Gibson for good, it matters little that his new movie, Get the Gringo, is the best thing he has been near for many a year.

Those viewers open-minded enough to have not banished Gibson to hell will be rewarded with a lively, unconventional and endearingly erratic action thriller. In Get the Gringo, Gibson plays a character known only as Driver (yes, film buffs, that’s the same handle Ryan Gosling traded under in Drive. All similarities end there, I can assure you).

Related Coverage
Grunberg’s gritty Gringo tale
What’s on in Perth
Mel’s back on the right track
Win ‘Get the Gringo’ movie prize packs
Leigh Paatsch’s blockbuster movie guide (May)
A former elite military sniper who later became an elite crook, Driver is being held in custody in a Mexican jail. Not just any jail, mind you. This is Tijuana’s infamous El Pueblito prison, home to the meanest, mustachioed hombres south of the border.

At the height of its notoriety – the Mexican government shuttered the joint in 2002 – El Pueblito was more a city unto itself than a mere correctional facility.

Friends and family of inmates were free to come and go at will. Or even live there if they wanted. Prisoners were able to run their own businesses, and carry their own firearms. As long as they were doing the time, any subsequent crime was neither here nor there.

The filmmakers lavish so much effort on recreating the bizarre world of El Pueblito, that the atmosphere conjured here – dangerous, colourful, busy – overwhelms in a winning way.

Inside this hive of activity, Gibson is free to provoke the mayhem demanded by Get the Gringo’s oddball story.

This he does very efficiently indeed. As the only non-Mexican resident of El Pueblito, Driver is a moving target 24/7.

The other inmates do not like him. The prison authorities loathe him.

And some former associates who have just learned of Driver’s whereabouts are on their way to kill him.

It is basic (and often brutal) stuff for the most part in Get the Gringo, with only the occasional dark comic aside to relieve the tension at hand.

All action scenes are conducted quite impressively, with a wild shootout inside the confines of El Pueblito ranking as the absolute standout.

Though Get the Gringo will be perceived as a low-rent offering because of its pulpy vibe, it is very much a B-movie executed with A-grade precision. So look out, Jason Statham. Mel Gibson just might be after your job.