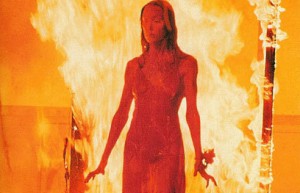 Carrie and Evil Dead 2: Dead by Dawn are horror classics, and it’s no surprise that the Terrace Theater would feature them on their monthly fright night lineup. But there’s more to the films than that. Both challenged the conventional wisdom of their era, like that the common horror film must contain only passive, weak female victims, or that it must be as humorless as possible.

In Carrie, what begins as something akin to a ’70s skin flick — complete with mildly sleazy flutework and slo-mo shots of naked girls in a locker room — quickly becomes uncomfortably horrific when a mundane shower turns into an awakening for Carrie White (Sissy Spacek). Even though we’re treated to shots of a young and very nude Spacek, the real nakedness occurs when the blood dribbles down her leg and we see Carrie’s humiliation and fears exposed to her ridiculing peers. The genuine horror in Carrie is the world the shy, friendless girl inhabits, with a mother who equates menstruation with evil, a principal who calls her “Cassie,” and townspeople who label her “Creepy Carrie,” all furthering the isolation that White already feels. It’s this loneliness that fuels her telekinetic powers when she becomes frustrated or upset. When a popular girl, Sue Snell (Amy Irving), decides to make right for the wrongs she committed against Carrie, Sue unwittingly contributes to Carrie’s eventual breakdown.

Based on Stephen King’s first published novel, Brian DePalma’s film breathes life into the standard archetypes that power the movie from the beginning to its quintessential, bloody ending. Released in 1976, the film was a Shakespearean tragedy sprinkled with the influences of the Master of Suspense himself, Alfred Hitchcock. The violin strikes bear similarities to Bernard Herrmann’s score for Hitchcock’s Psycho. In fact, Herrmann was to compose the score but unfortunately passed away before Carrie went into post-production.

Even though there are a couple of horror tropes that are about as subtle as a bat to the skull, Carrie has, over time, achieved a legacy for its feminist bent. It equates the uncertainty of blossoming womanhood to the dread and paranoia that come from Carrie’s seemingly supernatural powers, while the male characters are all malleable or cruel. But the underlying themes, the supporting cast, and DePalma’s direction aside, it’s Spacek’s Academy Award-nominated performance as Carrie White that makes the film’s narrative and the tortured girl’s fall so heartbreaking.

Whereas Carrie had pig’s blood soaking the frame, Sam Raimi’s Evil Dead 2: Dead by Dawn drowned it with gallons of cartoonish gore. Unlike Carrie, Evil Dead 2 has no underlying themes, just monsters and unfettered energy. Despite revisionist history, the original Evil Dead was intended to be a serious horror film, so much so that Stephen King dubbed it “the most ferociously original horror film in 1982.” Its simple premise — five vacationing college students in an isolated cabin in the woods unwittingly release vengeful spirits that possess its inhabitants and terrorize the sole survivor, Ash — left plenty of room for mayhem and gore.

By the time 1986 rolled around, the film’s creative team of director Sam Raimi, producer Rob Tapert, and actor Bruce Campbell had noticed the slapstick possibilities of the original and, more importantly, the lucrative potential of a sequel. This time, they decided that in addition to grossing out the first movie’s fanbase, they wanted to give them laughs as well. It was risky but it worked. Thanks to the murky clearance issues that kept them from using footage from the original Evil Dead, the team decided to do re-shoots that recapped the first one in a scant 15 minutes. What follows is a continuation of Ash’s predicament, complete with a new set of victims.

Evil Dead 2, like Aliens and Empire Strikes Back, elevates the mythology while moving past the conventional trappings of genre classification. The dizzying camerawork of the original is back, but on a grander scale. The stomach-churning bile and viscera of the first one were traded in for outlandish green blood and limbs, and Campbell’s character was no longer the bland collegiate dullard victimized by gnarly demonic spirits, but now a klutzy dork with fleeting moments of badassery. It operates like a classic Looney Tunes cartoon with a level of gore that the kids went nuts over and, for the adults, exaggerated theatrics reminiscent of the silent comedies of Harold Lloyd. The film and its eventual sequel, Army of Darkness, landed Raimi high-profile directorial gigs (like the Spider-man trilogy) and helped establish Bruce Campbell’s status as a B-movie icon and eventual TV star.

While these horror films can stand on their own, together, Carrie and Evil Dead 2 are crowd-pleasing examples of two movies that take the disparate paths of drama and comedy but ultimately achieve the same goal of a good scare.

Carrie and Evil Dead 2 will play at the Terrace Theater as part of Friday Fright Night on Fri. June 1 at 9:30 p.m. Tickets are $6. Visit terracetheater.org for more.