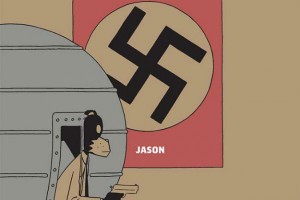 Iron Sky’ is certainly a divisive little film — what with its B-movie plot about Nazis on the moon and all — and director Timo Vuorensola is already working on his follow-up, another Nazi-themed film titled ‘I Killed Adolf Hitler.’

According to Twitch, the film is based on an Eisner award-winning graphic novel by Jason (no, he does not have a last name because he is that cool). The plot:

In this full-color graphic novel, Jason posits a strange, violent world in which contract killers can be hired to rub out pests, be they dysfunctional relatives, abusive co-workers, loud neighbors, or just annoyances in general — and as you might imagine, their services are in heavy demand. One such killer is given the unique job of traveling back in time to kill Adolf Hitler in 1939… but things go spectacularly wrong. Hitler overpowers the would-be assassin and sends himself to the present, leaving the killer stranded in the past. The killer eventually finds his way back to the present by simply waiting the decades out as he ages, and teams up with his now much-younger girlfriend to track down the missing fascist dictator…

That’s one hell of a plot synopsis. Vuorensola will direct from a script by DC Walker, and if the reactions to ‘Iron Sky’ are any indication, we’re looking forward to seeing the craziness Vuorensola cooks up this time around.